Back at the start of 2016, Kia was releasing the Telluride concept car, a seven seats crossover built on the same platform as the Sorento. So far they have not said much about it but it seems that Kia may release another version of the car. The 2017 Kia Telluride is expected at the next Detroit Auto Show in January of 2017. Unlike the previous version, this car is now expected to be pretty much a production ready vehicle.

Why? Well, Kia’s current Sorento has to fit in two very different markets, and it can’t really compete for all that well. The Telluride is expected to become their new seven-seat crossover while the Sorento will remain the five seats upmarket model which will be sold above the Sportage.

Is it really needed?

We all know that Hyundai is doing pretty much the same thing with the Santa Fe. However, only Kia and Hyundai are doing it and none of them is particularly successful. Because of that, both manufacturers are going to offer new cars to fit the gaps, and with these new cars, both of them should become a bit more successful. The Telluride will likely continue to use the same platform as the Sorento which is a rather new car.

However, it will more than likely go through a few changes in order to better fit the application. Expect it to receive a longer wheelbase than even the seven seats Sorento and it will likely become better regarding NVH levels as well. This should be achieved by upgrading the suspension system and also improving the quality of the materials inside the cabin.

There is still no word on the release date for the production 2017 Kia Telluride. Most rumors suggest that it will hit the market roughly a year after the Detroit Auto Show which would be in line with most other manufacturers.

The concept shown a while ago was criticized for looking too similar to the XC90. However, leaving that aside it is a rather well-proportioned SUV which would easily fit on the US market. Even if the new concept is still not out, it is safe to assume it will not differ much from the previous car. We expect the 2017 Telluride to boast the same boxy design but this time around with fewer design features usually used on concepts.

Expect the car to boast smaller wheels than the concept, less chrome, likely a slightly taller body and a more conventional look for the doors and rear end. However, the rest of the car will likely be very similar which is really exciting mainly because it will be Kia’s first car to depart from the norm in some time. 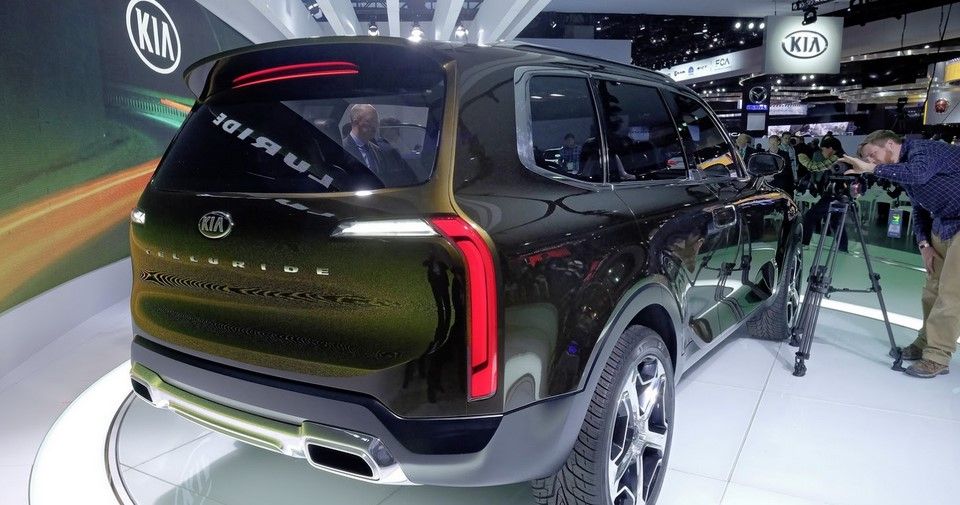 Unfortunately, at this point, not much can be said about the interior of the 2017 Kia Telluride. This is mostly because the original concept had an interior that was quite far away from production. The car expected at the next Detroit Auto Show is more than likely going to be at least similar to the Sorento. We expect a similar design but noticeably better materials, more room thanks to the larger overall body and even new equipment.

All of these should allow the Telluride to become a much more upmarket car that will compete with the likes of the Audi Q7 and Volvo’s XC90. Because of that, the price of the car is more than likely going to exceed that of the Sorento by at least $10,000 which would put it above $40,000 for a seven seats Telluride.

The first version had a hybrid powertrain but the production 2017 Kia Telluride will more than likely come with more conventional engines. Most of the cars at this price point offer multiple engine choices, and we expect Kia to do the same. There are two possible options for the upcoming Telluride. The car will likely come as standard with a 3.3 liter naturally aspirated V6 which will provide around 290 horsepower and up to 255 lb-ft of torque.

The other choice would be a 3.3-liter twin-turbo V6 which was released not that long ago on the G90.  This engine currently makes 365 horsepower and 376 lb-ft of torque, but we are sure it can provide more than that. Either way, the Telluride will offer more than enough power for this segment which is all it matters.

After the H-Tron Quattro was released last year there have been numerous rumors about a sportier large Audi crossover. These …