After the H-Tron Quattro was released last year there have been numerous rumors about a sportier large Audi crossover. These have been just rumors until a few days ago when the 2018 Audi Q8 Concept was showcased. The car looks production ready, and it seems it actually previews a future production model which is set for release in 2018. The car is a hybrid, and it no longer uses hydrogen as its main fuel source. However, the Q8 is still as impressive as any other concept out there.

In fact, we would say it is more impressive because it looks like a finished car which is not easy to achieve with a concept. Audi did reveal a few interesting details about the car, but some of the specs are still unknown.

It seems that the concept is using roughly the same wheelbase as the Q7 which is an already big car. However, it is just 198 inches long and 67.2 inches tall. This is roughly 1.6 and 1.3 inches less than the equivalent Q7. Having a similar wheelbase but a smaller body makes the Q8 seem a lot more impressive. The car is also 2.9 inches wider than the massive Q7 which gives it a super-crossover appearance, similar to that of the Maserati Levante or the Porsche Cayenne.

The production model might change some of these numbers, but we are quite sure that the car will be very similar to the current concept. There is no word on the pricing of the car. However, it seems that most experts think it will fetch a $5,000 to $10,000 premium over the equivalent Q7. On top of that, it may also feature unique trim levels and engines which could easily skyrocket the price over its sibling.

One of the most intriguing parts about the Audi Q8 Concept is the way it looks. There is no doubt about the fact it looks stunning. For this car, Audi went ahead and started a brand new design scheme with influences from their older rally-cars. The front end features the usual Audi-shaped grille. However, there are much larger chromed horizontal and vertical slats which give it a certain wow-factor. The headlights are shaped aggressively, and the massive air intakes, and Quattro-branded splitter complete the look.

From the profile, it looks on par with the H-Tron concept which shares roughly the same design scheme. The rear end is probably as impressive as the front. There is a wide tail light that spans across the width of the car. A large, and likely functional, diffuser, as well as side exhaust vents, have also been added to the mix. The result is probably one of the most impressive looking crossovers in the recent years.

Even though this is a concept, Audi already said that the technology used here will be used in the upcoming A8. This also means that the production version of the Audi Q8 Concept will more than likely feature a very similar cabin to the original. Here Audi got rid of all the usual buttons and instead installed touch-based controls everywhere including on the steering wheel.

The center stack features two wide touch-screens which control everything about the car. To the left, there are the controls for its lights while the instrument cluster consists out of Audi’s great fully digital panel. 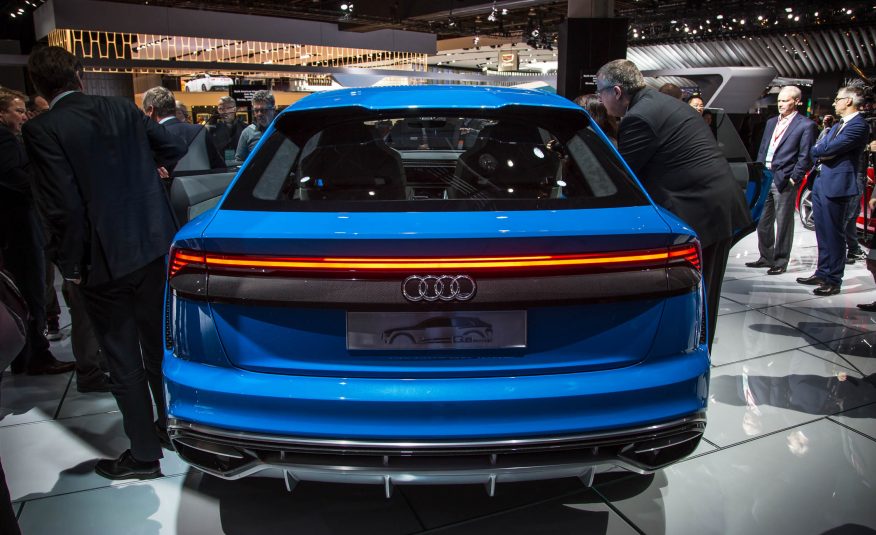 Audi says that the car will get up to 37 miles on its lithium-ion battery. This will feature a charger that will give it 100% range in two and a half hours from a normal 240V outlet. With the battery fully charged and a full tank of gas the Q8 is expected to have a range of over 600 miles which is very impressive for the performance. 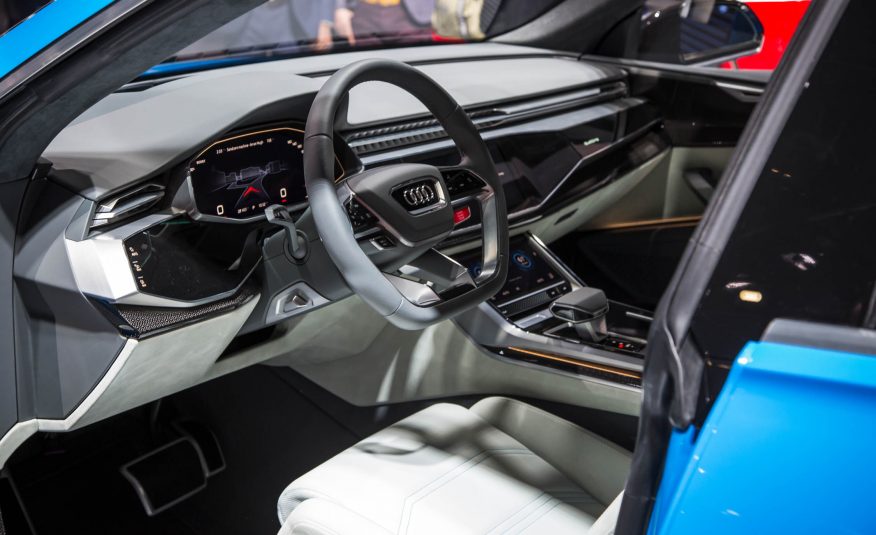