Thanks to the fact electric cars are starting to become more popular there are more and more manufacturers having a go at it. One of them is Toyota. Even though so far Toyota didn’t release a production electric car, it seems that they just might in the future. No that long ago the 2017 Toyota i-TRIL Concept was released, and so far it seems quite impressive.

Also, despite being a concept with pretty futuristic technologies involved, the car could eventually hit the market as a low volume electric car. Unlike many other cars out there, the i-TRIL is a bespoke electric car with enough passenger space for up to three people. Also, even though it is basically a car, Toyota tried their best to make it feel special.

In order to do that, despite having four wheels and two doors, like many other cars out there, it does feature some unique things about it. For starters, the i-TRIL can lean in order to take corners at speed without putting too much stress on the passengers. This will reduce the G-forces felt by the passengers, and in theory, it should also make the car much more stable than otherwise.

This technology will allow the rear wheels to stay perpendicular to the road with the cabin and front wheels being able to lean. This technology was seen before on trikes where it was quite successful. On top of this rather impressive piece of technology, the i-TRIL also features a very impressive interior and a unique design.

Unfortunately, even if it may be put into production in one form or another, the car is still years away from release. In fact, Toyota showcased it as a vision for a 2030 European city-car.

Even though it is rather unique, the 2017 Toyota i-TRIL Concept does feature a few design traits previously seen. For starters, it uses a bubble as the passenger compartment which has large doors that swivel up. This not only allows the passengers to get in and out of the car with ease. The doors, despite being quite large, should also work in tight spaces without too many issues. The wheelbase is quite short, and the rear wheels are mounted on a much narrower axle than those in front.

This should allow it to put all of its power to the ground and also be quite stable at speed. In the front, the car features design cues from Toyota’s current corporate look such as the triangular touches or the blacked out accents. The rear of the car is also quite similar with a similar pattern for its tail lights to those on the Prius.

Because the 2017 Toyota i-TRIL Concept is meant as a city car, Toyota did their best in order to make it as easy to drive as possible. All the controls are drive-by-wire, and the car doesn’t have any pedals. Instead of a steering wheel, it features two joysticks that will control the acceleration, braking or steering. On top of that, there are small control pods on the sides meant to give the driver full control of the car’s functions.

The floor has been covered in real wood while the upholstery is a sort of fabric that mimics Alcantara. Unlike many other cars, the i-TRIL only has three seats in a 1+2 configuration. Which maximizes cabin space. On top of all that, the car also features a fully autonomous driving mode that will come in handy in a busy city. 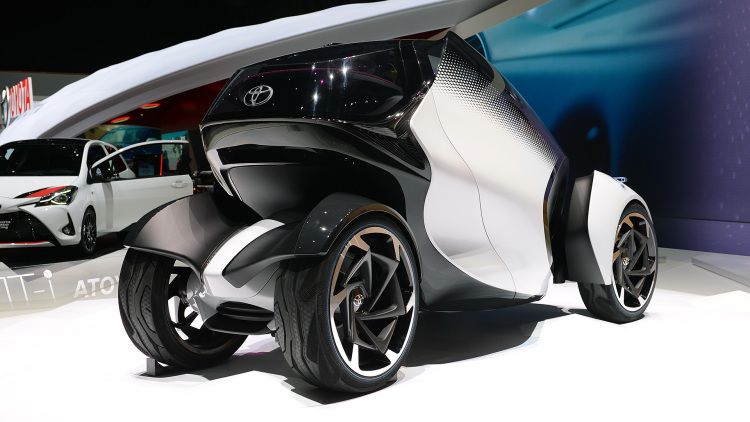 Unfortunately, Toyota hasn’t disclosed the engine that powers the 2017 i-TRIL. Despite that, they did say it is a fully electric vehicle with a range of at least 125 miles. This is not that much, even by today’s standards. However, let’s not forget the i-TRIL is rather small and on top of that it is meant as a city car. Because of that, being all electric and able to drive 125 miles, it should easily suit the lifestyles of many people around the world.

If this type of car proves to be successful then an internal combustion engine, even a small one, could easily be added to increase the range. Also, until 2030 the batteries will likely improve a lot so that we can expect a lot more range than just 125 miles. 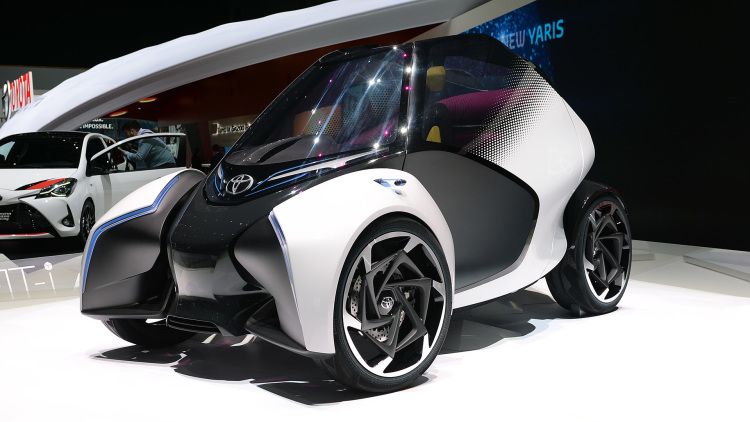