As newborn heavy trucks with international standards, Sinotruk A7 series has been keeping pace with global development, successfully made a breakthrough on domestic technology system, set up a new platform for China’s high-end heavy trucks, therefore, it is honorably regarded as China’s “Heavy Truck Leader, King on the Road”. Due to its glorious appearance, comfortable experience, excellent performance and economical design, it has become drivers’ prior selection.

A7 series’ comfortable driving experience benefits from the thoughtful design of the whole cab. Equipped with four-point suspension air shock absorber, brackets, transition brackets, lateral stability damper, limit blocks, rear shock absorber assembly and other parts, the cab enables drivers to enjoy comfortable and steady travel. The 90-degree door opening angle and two get-on handles and stainless anti-skid pedals are suitable for drivers with different figures. The rear mirror reaches far and wide, along with its additional blind spot mirror, which greatly increases driving safety. Its large inside space gains high evaluation and the users are able to flex their bodies at ease. The steering wheel is matched with auxiliary operation buttons to start the audio, bringing more interest to users during the travel. The button arrangement on the dashboard is reasonable and easily accessible, and the design of raised spots is more favorable for users to drive at night. There is another thoughtful design that a space at the side of doors is saved for holding water cups. Many outlets at the side windows make users no longer worry journey in winter. Bunk beds are matched with high-resilience polyurethane foam mattress, making sure that drivers can have a good rest after long-time travelling and let them experience warmness like being at home. A7’s carefulness in details has earned trust and support of numerous clients from home and abroad. 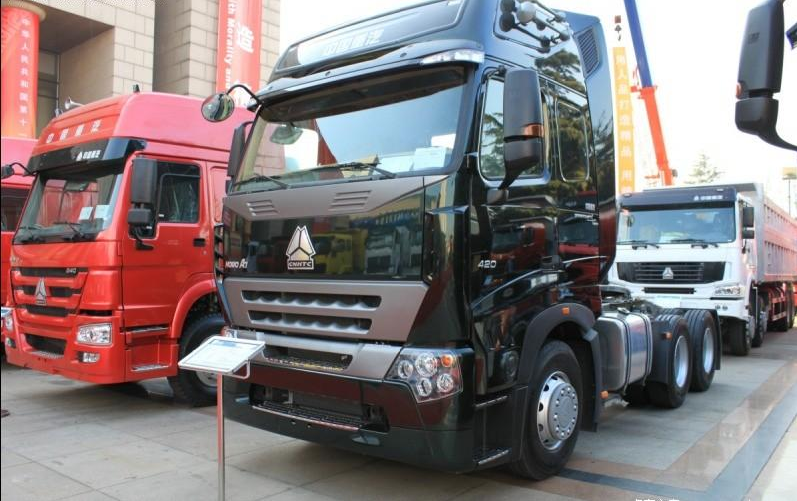 A7 series’ excellent performance derives from five aspects. First, dynamic performance.A7’s highest speed reaches 91KM/h. Adopting D12 Engine, with 460 house power, large displacement, A7 is full of momentum even in low-speed state, and performs well in climbing slope. Second, economical oil consumption. A7 adopts newborn electronically controlled common rail fuel system, which makes injection and spraying more precise; refined DLC injection nozzles makes it achieve higher reliability and anti-agent effect. Intelligent manual and automatic ATM gearbox can switch gears automatically, saving 3%-5% oils by only manual operation. Third, braking performance. A7 is assembled with disc brake, which is less heavier and performs more than 30% better than drum brake. Besides, its excellent performance on heat dissipation perfectly avoids heat recession effect of disc brake and ensures the braking force of the truck, reduces the shake rate of the truck head and mitigate tyres’ friction. Fourth, stability. A7’s front and back axles have high stability. The front axle includes 7ton and 9ton. 7ton axle is developed for road vehicles, its carrying capacity exceeds same trucks in domestic market. 9ton is the among the axles with the highest carrying capacity. Researches suggest that its operational and steady performance has been in the optimum state. Fifth, resilience. SMARSHAFT is an automatic mechanical gearbox. There are four built-in gears, which makes it operate easily and meets the requirements of different roads.

A7’s economic designs is applauded by all Sinotruk fans. First, AMT has a great advantage of controlling cost in team work. Using ATM gearbox prolongs the service life of clutch, reduces drivers’ mistakes when operate the truck, and makes the driver easily master the economical driving ways. ATM not only decreases maintenance expenditure, but also brings much more returns. The AMT played a unique role in saving operation cost. Second, in Economical E mode, the starting AMT servo quickly shifts to fourth gear. Although the speed is not as fast as the acceleration of the same type of manual gear, all the automatic control movements are very soft and smooth. After the vehicle enters coastal high speed railway, the E mode is locked and the engine keeps at 1400 rpm. The instantaneous fuel consumption is 17 l/hour. It can be seen that the D12.38-30 engine is economical. In economy mode, the default upshift action is 1500 rpm and downshift action is around 900 rpm. The entire AMT shift action session stays in the economy rpm region and there is almost no shock in shifting. Even if you are a new driver, with the instantaneous fuel consumption display, you can quickly find out the control of the throttle opening degree. Third, the newly designed D12 series engine, the most representative heavy truck engine in China, has a power range of 340-460Ps. China National Heavy Duty Truck has developed a series of new technologies and achieved obvious achievements, which makes the D12 engine have good maneuverability. The large displacement and high power enable the vehicle to gain power from low idle speed, while its wide speed range enables the whole engine to obtain constant power values and maximum torque values. This feature determines the perfect fuel economy and driving performance of the D12 engine. The exquisite manufacturing and assembly process enables the engine to have an overhaul mileage of more than 1 million kilometers. It effectively solves the problem of high after-sales failure of other similar models in China. To meet the needs of different customers, China National Heavy Duty Truck has also developed the D10 series engine (270PS-380PS) for the HOWO-A7. The D10 series engine adopts the independent innovation of the first technology in China – the supercharger in the middle. The application of this technology has brought substantial changes to the intake and exhaust system, resulting in smooth intake and simple exhaust, making the vehicle’s “lung” function more effective and better fuel economy. Both D10 and D12 engines meet the National III emission standard and have the technical potential of National V and National IV.

The Silverado is one of the best selling cars in the World. Back in 2016 GM managed to sell more …

There are many different types of dump trucks for various purposes. Some take up large amounts of space, while others …