After Ford just released their new Super Duty line and GM revamped theirs, it seems that Ram is going to do the same. So far not much is known about the upcoming 2018 Ram 2500 Heavy Duty, at least officially. Not that long ago test mules of this truck have been seen testing on the open road. The most interesting fact about these is that none of them worn the Ram testing facility inscriptions. Instead, all of them were marked by Cummins which might suggest some interesting changes under the hood. On top of that, it seems that not only the engine will be upgraded but also the design.

The release date is unknown, but it seems we might see the vehicle in the late 2017. Its price is likely going to remain on the same level with that of the previous generation.

An all new model?

While we, like many others, hoped for Ram to release something all new, it seems that the 2018 Ram 2500 Heavy Duty might be just a refresh. This means that we will likely see small design changes and a lot of upgrades under the skin. From what we can see from the test mules, the truck will remain true to the original. This means that its crosshair grille will stay which is great news for all those Ram lovers. On top of that, the headlights and lower bumper do seem to be different on all the test mules.

However, the cabin, as well as the bed and rear of the trucks, seem to be identical to the ongoing model. A very interesting point about these trucks is the hood.

On the diesel test mules, we can clearly see a hood-scoop camouflaged by plastic. This might be there to offer fresh air to the engine or even cooling air at higher speeds. Ram decided not to say much about it. However, it might be some sort of extra cooling needed for the new engine.

Just like with the exterior, we do not expect all that many changes here. So far the test mules are identical to the production models. Expect here a better infotainment system and likely a better fit and finish across the range but that should be it. 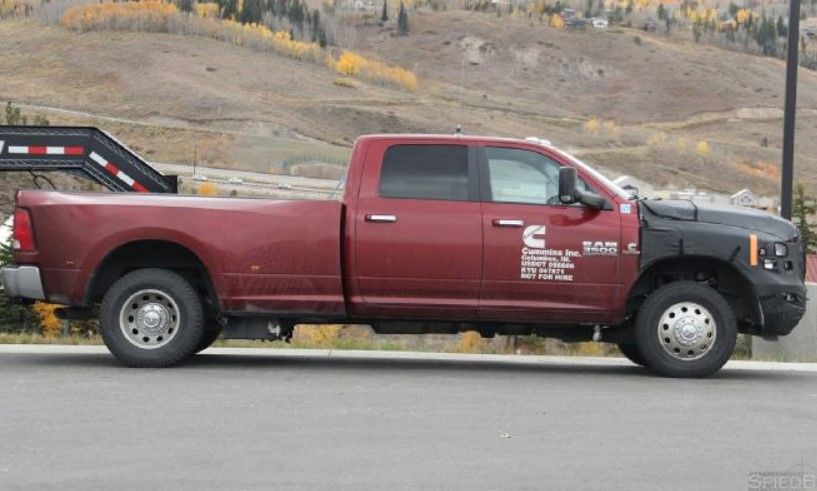 While the petrol engines are unlikely going to change, the 2018 Ram 2500 Heavy Duty will more than likely receive a new diesel. Cummins was already updated their 6.7 liters inline 6, offering with up to 15% more power and torque and a 7% better fuel efficiency. The one provided in the Ram was roughly 20% stronger than what their crate engine was capable off. This might mean that the new Ram 2500 could receive a 6.7 liter turbocharged Cummins with as much as 1,000 lb-ft of torque and more than 400 horsepower.

This would be the first civilian truck engine to get past 1,000 lb-ft of torque, and it would likely dethrone Ford for quite a while from now on. In order to support all that power expect a beefier transmission as well as the better cooling system which might also include the previously mentioned hood-scoop.

In order to focus on the specifics of each of their trucks, Nissan has been gradually rolling out versions of …

The newest 2018 Volvo XC40 is small and different mini SUV from all other competitors. A few years ago when Volvo …