Even as Ford debuts hybrid and electric trucks, it seems to be accelerating its pace toward having one or two off-road models of every truck and many of its SUVs. This is a trend that the entire automotive industry has been following as brands try to find ways to make their SUVs more popular with buyers.

It’s even hard to count them up. The Ford Bronco, introduced to specifically challenge the Wrangler Unlimited, already had its Badlands and its Wildtrak editions. Now it will have a Raptor edition. The smaller Ford Bronco Sport is equipped at every level to go off-road. It too has its own Badlands edition. The Explorer and Expedition are now offered in Timberline Editions that have been altered to allow for more serious off-roading.

The Ford F-150 Raptor has competition in the form of three versions of the F-150 Tremor. The Ford Ranger now has Tremor editions in two trim levels. Even the F250 has its own Tremor editions. Read more about this topic here.

Too Big to Off-Road 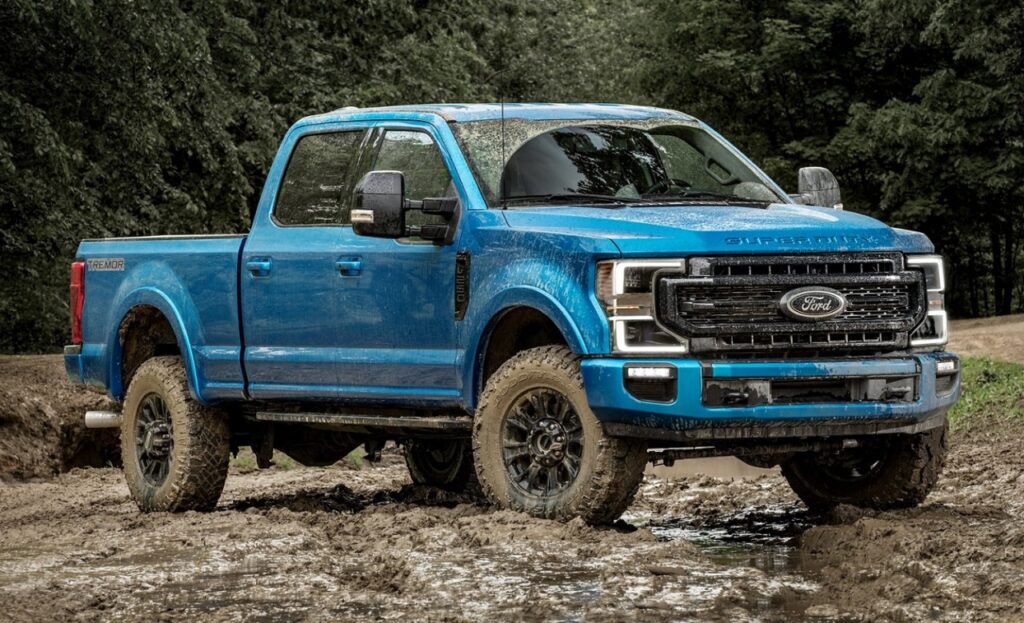 If you see the F250 Tremor, you’re going to wonder if this thing is too big to really be manageable off-road. This is the large crew cab mated with the large 6.75-foot bed. Even as big as it is, it manages a 31.6-degree approach and 24.5-degree departure angle. It has an extra two inches to give it 10.8 inches of ground clearance, and it is waterproofed up to a meter deep. Ford has clearly tried to challenge the Ram PowerWagon which currently holds the title to best Heavy Duty off-road truck.

The other off-roader that seems too big to go far down the trail is the Expedition Timberline. This is Ford’s answer to the Jeep Waggoneer, and to be fair, it doesn’t weigh as much as that rival. Plus, it has Raptor-level performance, ensuring it can move quickly. It has 10.6 inches of ground clearance, and the exterior has been altered and enhanced for trail use.

Still, this is a big ride that seats up to 8 people. The fact that it can handle rough trails is due to its advanced features like Trail Turn Assist which makes the tires turn at sharper angles. The One-Pedal Trail Assist lets you drive with your foot only on the accelerator. If you take it off, it’s as if you hit the brake. Then there’s Trail Control which is like cruise control but for very low-speed travel.

Finally Living Up to Its Name 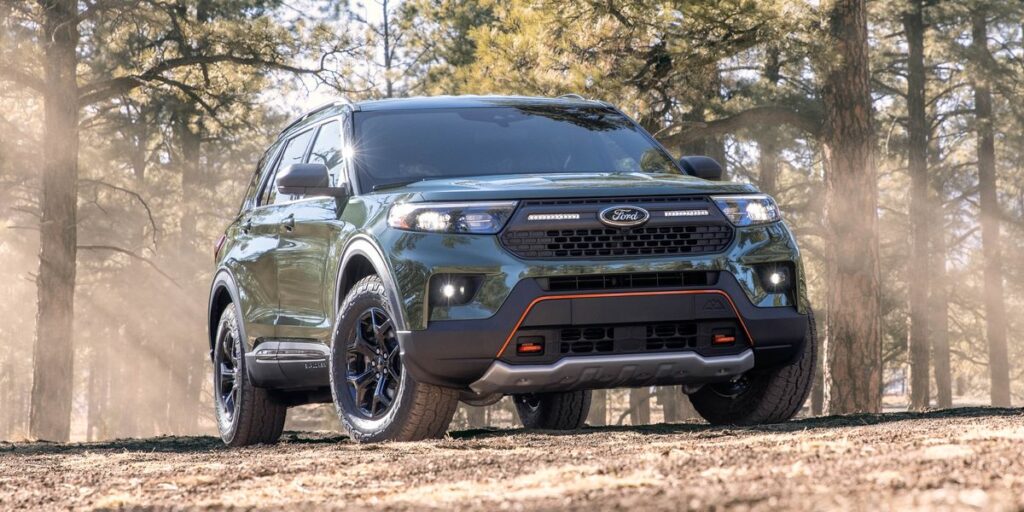 The Ford Explorer Timberline has an upgraded exterior and suspension to make it much more off-road ready. You could say it finally decided to earn the name Explorer. This ride looks more at home on the trail. It seats seven, but it’s not the living room on wheels that you find in the Expedition. The terrain management system is upgraded with four-wheel drive and offers seven modes, including trail mode and deep snow/sand mode. It’s not quite the GOAT you’ll find on the Bronco and Bronco Sport, but it’s highly capable.

The Ford Bronco was highly anticipated, and yet it was hard to know if it would live up to its name. It could have just been a knock-off that looked like the Jeep Wrangler, but didn’t have the capability. Instead, it has a more powerful, yet more efficient engine, and it is offering all the fun of open air driving. It meets or exceeds the Wrangler in many categories. It has sharp departure angles, high ground clearance, and a long list of equipment.

The GOAT system has drive modes that include crawl control, Baja desert, and deep ruts. The Badlands edition directly rivals the Jeep Wrangler Rubicon. Wildtrak editions are the first high speed SUV of this type. The anticipated Bronco Raptor will have the power of the Raptor truck and probably outrun the Wildtrak as an off-roader with high-speed trail capability.

Smaller, lighter and more nimble, the Bronco Sport could have been left behind. However, it has a standard 5-mode GOAT system and standard four-wheel drive. The Bronco Sport Badlands is so well-equipped that it can challenge Trailhawk editions of similarly sized Jeeps. Not too shabby for the most affordable off-roader on the list.

The Raptor Gets Competition 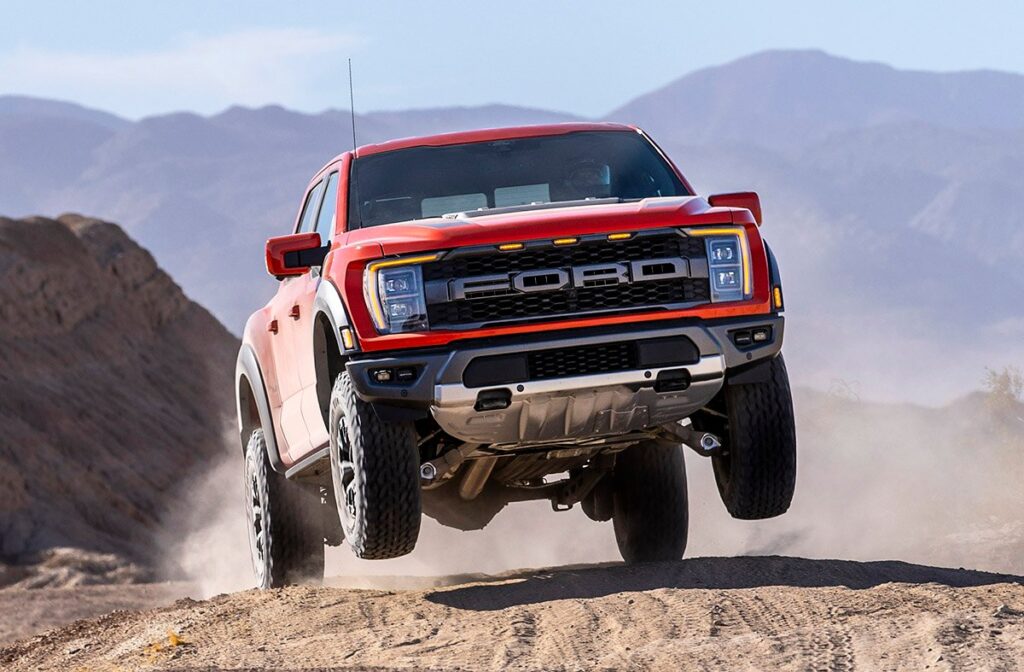 The Ford F-150 Raptor has been the standard bearer as Ford’s leading off-roader. It has a High-Output Ecoboost V6 tuned to deliver 440 horsepower and 510 lb-ft of torque. It’s difficult to see why Ford would want to create off-roaders to compete within the F150 family. The answer lies in three things. Price, Tow Ratings and Maneuverability.

The Raptor’s steep pricetag is undercut by the three Tremor packages. Shoppers who are serious about off-roading can skip the fancier cabin and get what they want for less money. Then there’s the fact that the Raptor can only tow 8,200 pounds while the Tremor can tow up to 10,900 pounds. The Tremor also boosts payload capacity from 1,410 to 1,885 pounds. This capability makes even the Tremor High package competitive against the Raptor.

Lastly, the Tremor is more the size of regular F-150 Ford Trucks. It’s big, but it is not as big or wide as the Raptor. That size difference gives it an advantage on narrow trails that the Raptor couldn’t handle. Plus, some Tremor editions have a rock driving mode that was first introduced on the Bronco.

The Ford Ranger hasn’t been a competitive off-roader. The Ranger Tremor changes that equation, and it has an XLT version to make this a more affordable truck than the others on this list. There is a Ranger Raptor, but it is not available in the U.S. It remains to be seen if the Ranger Tremor can carve off a slice of the market that belongs to the Jeep Gladiator.

This long and growing list of off-roaders are destined to compete with each other for buyers. Will there be enough new customers to make these new entries worthwhile? It’s hard to imagine a more competitive marketplace for off-roading utes and trucks. Ford has its work cut out for it.

As soon as you take your new car out of the showroom, its value starts depreciating. Almost every asset depreciates, …

The sad truth is that you can’t always trust what your mechanic is telling you. But how do you know …

One of the exciting experiences in life is to own a jeep. However, it would help if you went through …