Geely is one of the largest car manufacturers in the World selling north of 750,000 cars a year just in China. In order to expand, even more, a few years ago they bought Volvo while last year they introduced an all new manufacturer. Lynk & Co is their premium brand which is expected to be sold across the World. The brand was released with the 01, a compact luxury crossover. Well, not that long ago they also revealed the 2018 Lynk & Co 03 concept.

The car is a compact premium sedan which seems to be quite dramatic regarding design. Its production version hasn’t been revealed just yet but it was spied a couple of times, and it looks promising.

While the company is still relatively unknown, their platform isn’t. The 03 is going to use the same compact modular architecture, or CMA, used by Volvo in their upcoming XC40. This platform leaves plenty of room for development in the future. On top of that, it is one of the most advanced chassis around so Lynk shouldn’t have any issues delivering a highly capable car. The car’s price is still unknown.

However, considering this is a luxury brand they are expected to come with luxury car prices. The 2018 Lynk & Co 03 is more than likely going to start at north of $30,000. For the price, the car will really have to impress the market in North America and Europe, especially since it is brand new.

However, if people manage to see past the brand stuck on the hood, then the 03 looks rather impressive. The concept has to be one of the most interesting looking sedans we have seen in the past few years. For starters, it is quite clear this is not their design. The car’s front end looks remarkably similar to a Porsche, but that’s not unusual for a Chinese manufacturer. The swept back headlights, dual-grilles design as well as the aggressive splitter make the 03 seem special. We are glad to say that the car looks all new from the side or from the back.

Its profile is reminiscent of a four-door coupe while its rear end is quite dramatic with L-shaped tail lights and a dual-exhaust. Even though the production version hasn’t been revealed, the camouflaged prototype is very similar to the concept which is great considering most of its future rivals are one of the dullest cars around. 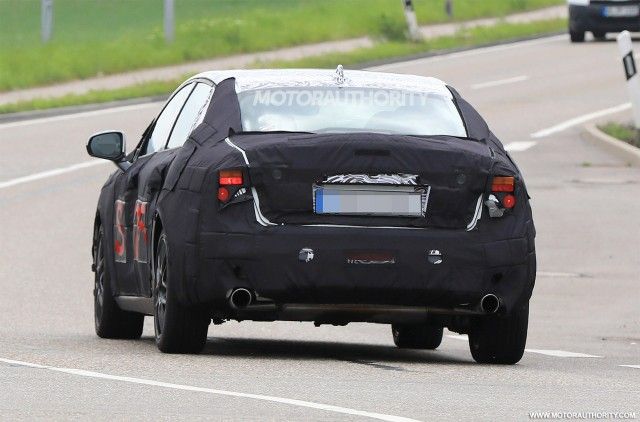 Even though the car hasn’t been revealed just yet, we have a pretty good idea about its cabin. In fact, the 2018 Lynk & Co 03 is more than likely going to boast the same dashboard as the 01 or the original concept. Expect it to get a fully digital instrument cluster, a large infotainment screen on the center stack and a minimal amount of buttons.

Like with the 01, the 03 will be connected to the internet at all times in order to allow the manufacturer to send over the air updates. The materials will be at least as good as those in its main rivals while the driving position is expected to be similar to that of the future S40.

The 2018 Lynk & Co 03 will more than likely use the same engines as Volvo’s small range of cars and the 01. This means the base car will likely get a 1.5-liter turbo-three offering around 150 to 170 horsepower and over 160 lb-ft of torque. A hybrid version using the same gas engine is also a real possibility. This will likely offer north of 200 horsepower and 200 lb-ft of torque while delivering considerably better fuel efficiency.

An automatic gearbox, likely an eight speed unit, is expected to be standard across the range. A four-wheel drive version of the 03 is also a real possibility thanks to its highly modular platform.

Back at the start of 2016, Kia was releasing the Telluride concept car, a seven seats crossover built on the …