One of the most powerful electric cars – the new 2018 Faraday Future FF 91 delivers more than 1,050 hp. A few weeks back Faraday was announcing that they were going to release a new electric car to compete with the Model S. This was supposed to come in two different versions with two different battery packs. At the time rumors suggested that the car was going to cost anything between $75,000 for a base model and all the way up to more than $170,000 for its six special edition units. The car was later confirmed to go into production while a few days back some interesting news were released, but more on that later.

Currently the company doesn’t really have a suitable production plant for the 2018 Faraday Future FF 91. Many suggested that the company would build a new facility on the same site that Tesla wanted to open their factory a while back. It is worth mentioning that this has not been confirmed so far.

Will it go into production?

So far it seems that the Faraday is bound to be released in the late 2017 or early 2018 as a production vehicle. The company’s CEO stated that the first six special edition units are going to be made while the deliveries for the other models will start some time after that. The largest strong point of the Future FF 91 was the price. The early rumors suggested that the car will directly compete with Tesla while offering roughly the same things.

However, this is not exactly true. A few weeks back Faraday’s CEO said that the FF 91 would cost under $300,000 in China. The price for the US market may be even higher than that which would make it more than three times as expensive as a base Tesla Model S. However, they haven’t said what model is going to cost that much. We doubt they released the price for the most expensive version of the car which would make the Future too expensive to become successful. Instead of going for the usual sedan design, the 2018 Faraday Future FF 91 looks more like a high-end hatchback, similar to the European Citroen DS4. The car is both shorter and lower than the Model S, but it is wider. The end result is something unique that would easily become one of the most successful cars of its class. The front end features a LED bar as wide as the car which acts as the headlights.

The lower part of the highly aerodynamic bumper features the car’s intakes which are meant to cool its battery-cooling radiators. On the hood there is a pop-up LIDAR which is going to give it autonomous capabilities. This is rather unusual and it does ruin the design to a certain extent. The rear features clear LED tail lights and a really clean looking bumper.

Like the Tesla, the 2018 Faraday Future FF 91 also features a large tailgate that will expose the massive trunk.

So far Faraday showcased the technical capabilities of the FF 91 but not much regarding interior. The car will feature as standard a massive glass roof which will make it seem really airy inside. On top of that, despite being the size of an E-Class Mercedes, Faraday boasts that the car is as large as an S-Class inside. It will feature class leading technologies with three touch-screens as well as some of the best rear seats in the industry. 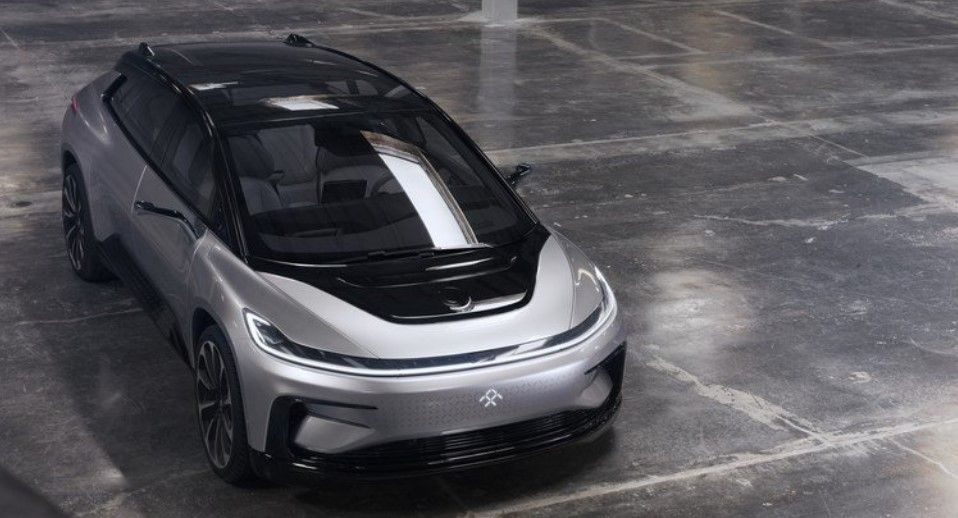 However, the production version may vary a bit. The official numbers have been released with a 0 to 60 MPH time of just 2.39 seconds and a top speed more than 150 MPH. The car will feature a range north of 300 miles which is already better than the competition.

Faraday said that it will be able to charge up to 500 miles per hour while a usual home charger will give it around 50% in four and a half hours which is around the average of today’s electric cars.