Even though at first electric cars were not that successful at first, more and more manufacturers started making them after Tesla proved that electric cars do not have to be dull. One of these manufacturers is VW which currently does have a few hybrid and electric models on the market. Unfortunately none of these is really up to the task of competing with Tesla. This is about to change though because not that long ago the VW ID electric car was showcased before the Paris Auto Show. So far the car is nothing more than just a concept. However, VW did announce that its production model will be available around 2023.

Its release date might be a bit too far away in order to become successful. Why? Well, both Tesla’s Model 3 and the upcoming Chevy Bolt will be released at least two years earlier. These will also be priced similarly to the VW so they will have a lot of catching up to do. The actual price of the car hasn’t been revealed but VW did say it will cost around as much as a fully equipped Golf. This means that it will likely be priced around $30,000 which is perfectly reasonable for a car like this.

Unlike the Golf though, the ID is actually using VW’s all electric MEB platform. This was first showcased on the BUDD-e earlier this year. 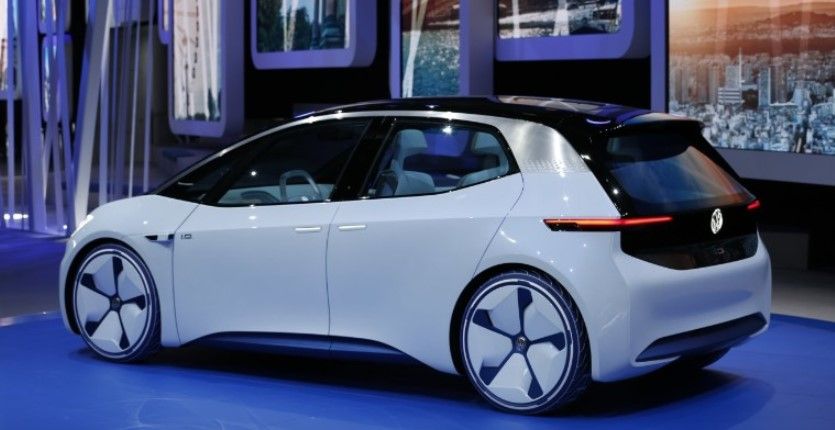 Like with the earlier concept, the VW ID electric car does not use a petrol engine to extend its range. It is also noticeably more economical than pretty much any other current electric car. The ID is expected to use a rear-mounted electric motor which will offer up to 125 kW or right around 168 horsepower. The torque figure hasn’t been offered but we do expect over 200 lb-ft, especially considering its rivals. There is no word on the capacity of the battery either. VW did say though that the car will offer between 249 and 373 miles of all electric range, most likely on the European cycle.

This is not all that bad and it is actually better than the Tesla Model 3. The US version will likely get closer to 200 and 300 miles which is still plenty for the size. This range also confirms that there will be at least two versions for it. Both will likely use the same engine but the battery pack will be considerably larger for the top end model.

How does it compare?

Just like with most of its future rivals, the VW ID electric car will use rear wheel drive and a battery pack mounted in the floor. This will give it superior driving characteristics to a normal petrol powered car and it will allow for quite a bit more room inside the cabin. However, there are drawbacks. For starters, the concept looks to be similar in size to a Golf which also means that the battery might intrude in the cabin. On top of that, the design, inspired mostly by the “uP!”, is not the best out there.

The ID looks futuristic and quite impressive but it doesn’t seem to be ready for production. Our best would go on a modified Golf-design which would make more sense considering VW’s history but it would provide a sub-par competitor for the Tesla Model 3 for sure.

VW wants a fully autonomous driving car until 2025 and the ID also showcases part of the technology. There is a retracting steering wheel and very few actual instruments. Expect the production version of the car to depart from this type of design and move to something a bit more similar to what the competition is going to use.

Even though the Wrangler is the best-known Jeep out there, they did make a few interesting models in the past. …