ATVs are some of the most versatile vehicles ever made. These are usually great in off-road, but some of them can be used on the road while some can even be used over water. So far none of them has been able to fly though, but this changed not that long ago with the Skyrunner Flying Buggy. This is two seats all terrain vehicle which also happens to be able to fly. However, it is not a plane, but instead, it acts as a motorized parachute. Its canvas parachute can be deployed with ease while an engine is used to inflate it and give it forward thrust.

Thanks to it the flying buggy is the first production flying all terrain vehicle which is not exactly an easy feat. This has been achieved with extensive engineering in order to offer a reliable and easy to fly machine that won’t break the bank either.

The Skyrunner starts at little under $140,000 which may be regarded as quite expensive. However, in the world of flying vehicles, this is in fact quite affordable. It also offers great value as it can double as an all-terrain recreational vehicle which happens to be great at both roles.

Like we said, there has been a great amount of engineering involved with the Skyrunner Flying Buggy. In order to be able to fly, this ATV had to be as light as possible, so it only weighs 1,200 pounds with a maximum takeoff weigh of 1,740 pounds. To achieve this weight, the Skyrunner is quite impressive. The entire frame has been made out of composites, so it is considerably lighter than any of its ground competitors.

It uses a fully independent suspension front and back and it comes with all-wheel disc brakes. The buggy comes with rear wheel drive only, so this might be the first compromise they had to make.

Like we said, the Skyrunner Flying Buggy only sports two seats. These are mounted in tandem with the rear seat being higher than the one in front. This helps with weight distribution, and it is the usual setup for this type of flying machine. The front end has a carbon fiber canopy installed which houses most of the electronics on board.

On the top of the frame, there is a set of high powered LED lights while the back features a large wing used in the air and on the ground. The back of the Skyrunner boasts a large three-blade propeller as well as the exposed Rotax 115 horsepower engine used for flying.

But how can it fly?

The Skyrunner Flying Buggy doesn’t require anything special in order to lift off. The driver has to take a 14 hours course which will teach all the basics and procedures needed to fly the Skyrunner. On top of that, the Skyrunner needs it parachute deployed before flying and after it should be able to go. A 450 feet runway is needed to take off with a 400 feet runway needed to land. This is quite good considering its weight and the fact it is quite a bit heavier than a comparable motorized parachute.

Once the Skyrunner is in the air, it can climb to 465 feet/minute which is not that bad. It can reach up to 10,000 feet, and it will cruise at just around 40 MPH in the air. The range is just about 120 miles or around 3 hours, so it should be more than plenty for most. 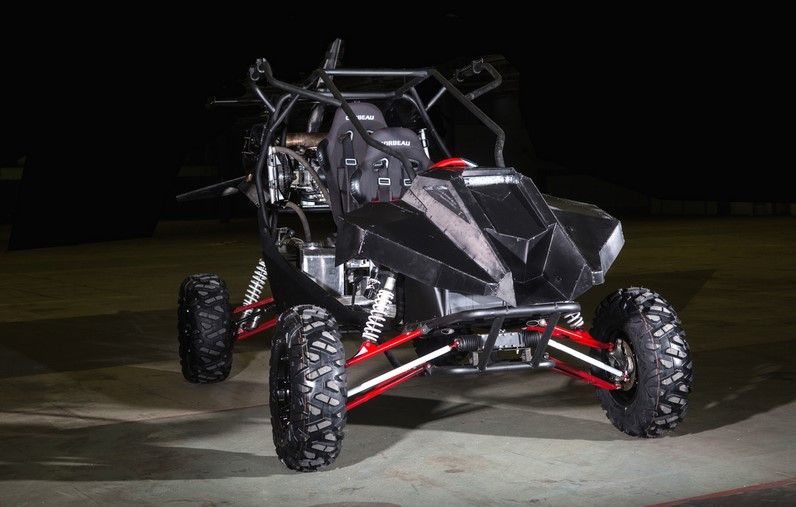 Is it any good in off-road?

espite that, the buggy does feature a beefy suspension setup with plenty of travel. This boasts FOX shocks, so it should be able to handle a lot of abuse.

The wheels are wrapped in Maxxis high-performance off-road tires, and it will be able to hit 60 MPH on the ground in just 4.3 seconds. This is achieved via a separate Ford turbocharged 3-cylinder engine which offers 125 horsepower sent to the rear wheels only via a limited slip differential. 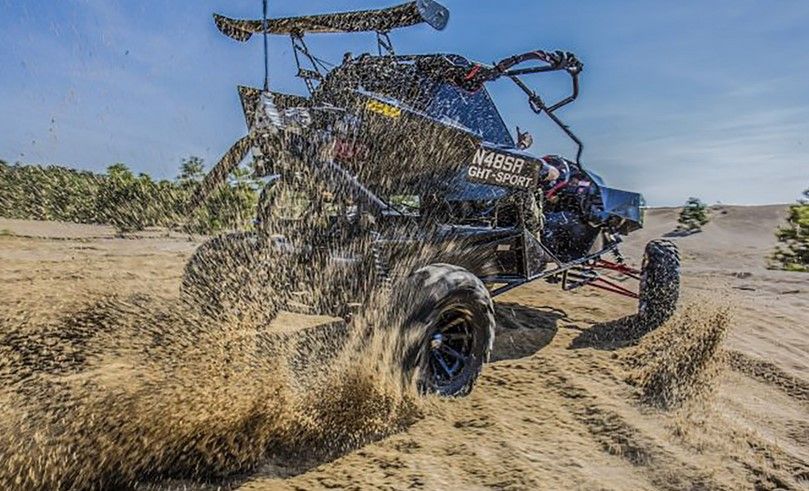