A few months ago Renault released a beautiful concept with the Trezor. The car is a concept which more than likely previews their future models. Unfortunately, we are quite sure that the Renault Trezor is not going to go into production. This is because Renault is well known for making futuristic cars that usually preview their future models. This has been the case with the DeZir a few years back and a few other cars before it. The Trezor is a very interesting model, and we may eventually see the technology used in it in a production car.

We said the Trezor is nothing more than just a concept at this point. However, unlike many other manufacturers who prefer to showcase clay models, the Trezor is actually a fully functional car. This is very interesting, and we are going to see why next. For starters, it is built with Formula E technology which is very impressive for this type of car.

Secondly, it is a fully autonomous vehicle, a system which may be seen in the future on Renault and Nissan cars. Lastly, the Trezor is one of the most beautiful cars released this year, and it shows how much Renault is investing in their future. Even if the car will never see production, the Trezor is so much more than just a concept. It is the future of Renault showcased in advanced for everyone to enjoy.

The chassis and running gear

The Renault Trezor is using a fully carbon fiber construction meaning that it has one of the stiffest and lightest chassis for a car this size. It measures 185 inches in length, it is more than 83 inches wide and features a drag coefficient of just 0.22. This has been achieved by making one of the lowest, widest and slipperiest cars to date.

The running gear uses the fully independent inboard suspension to keep the center of gravity as low as possible. Even though it is built out of carbon fiber, it weighs little over 3,500 pounds, and that’s because it is a fully electric car sporting a rather large battery.

The Trezor is one of the most dramatic appearances at the Paris auto show. Renault went for the usual GT shape with a pushed back cabin, a long hood, large wheels and a massive width. The car is also incredibly low for how large it is. The most interesting part about it though has to be the way the cabin is accessed. Instead of using regular doors, Renault used a single piece roof which lifts to allow the two passengers to board the car.

The roof also includes the hood and the windshield which is a massive curved red glass piece that wraps around the entire cabin. This clam-shell design has been used in the past on some concepts, but it has to be the most impressive implementation to date. The interior is nothing to be ashamed off either. Where the front engine would be there are cooling radiators and a massive space for the dedicated luggage. These are red and so is the rest of the interior.

The instrument cluster and most of the dashboard is similar to what Renault is currently using with a large portrait-mounted screen. The red accents continue with the badges, tires and even the roof using red as a primary motif. 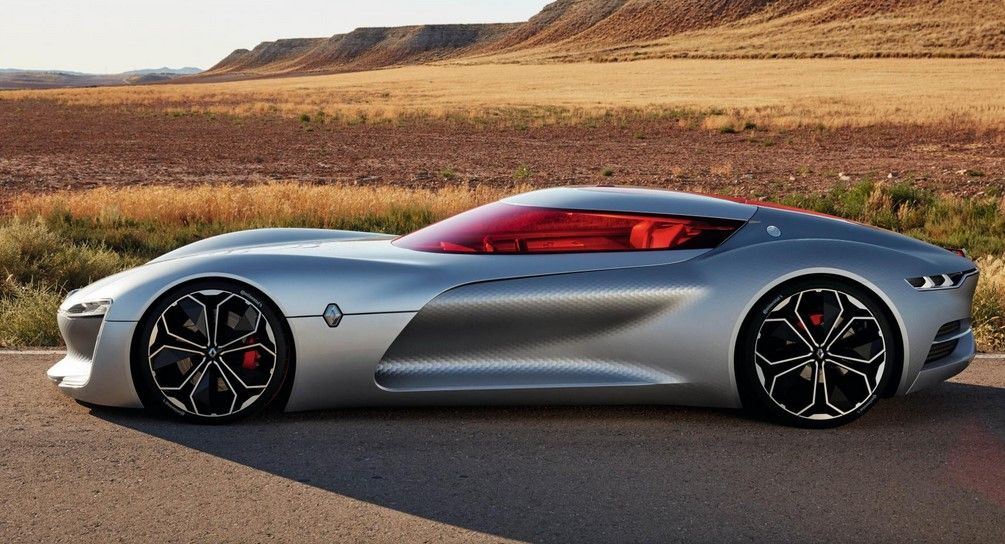 What makes it move?

The Renault Trezor is powered by a fully electric “Multi-Sense” powertrain. This has been actually derived from Formula E. There is a rear mounted electric motor which powers just the rear wheels. This can offer up to 349 horsepower and 280 lb-ft of torque. Renault says that the Trezor will do 62 MPH from a standing start in just under 4 seconds. The top speed is likely somewhere closer to 120 to 140 MPH.

The Formula E engine can also offer a tremendous amount of regenerative energy which should allow the Trezor to have a rather long range. Even though this is nothing more than just a concept at this point, the actual powertrain might be quite easy to adapt into production. Because of that, we might see a full electric Renault shortly which could be able to travel up to 200 miles on a single charge.

The newest luxury sedan 2017 Karma Revero has been releaved officially. An estimated price of this high-performance plug-in hybrid sedan …