In the past BMW’s were better to drive than pretty much any other average saloon even though their price was in line with most other sedans out there. While things have changed over the years, to this day BMWs are still considered sporty sedans and that’s not far from the truth. The problem is that the cars are a lot more expensive than they used to be and people can usually get a similar driving experience without having to pay that much money.

While it may seem a bit strange considering their prohibitive pricing scheme, BMW started to launch hybrid and fuel efficient versions of their cars.

For those looking to get a state of the art car with as much technology as possible crammed under the hood then the 2017 BMW 330e iPerformance does make a lot more sense. The car uses the same engine as the 320i, a 2 liter turbocharged inline 4 petrol mill good for up to 180 horsepower. This engine is then mated to an 8 speed automatic which is being provided by ZF and which sends all of the power to the rear wheels.

The extra power would usually mean that the car is faster but this is not true with the 330e because it is actually slower, quite a bit slower in fact. The 0 to 60 MPH time is around 6 seconds versus the 5.2 of the 328i and it can barely manage to get to 140 MPH. On top of that, the 5.7 kWh battery pack can only provide enough juice for up to 14 miles, it takes up a good chunk of the truck and it also means the fuel tank is 5 gallons smaller.

This makes it have a lower range than the petrol engined car and on top of that the hybrid will be in fact using more fuel when the battery is depleted and the cruising speed is over 70 MPH due to the added weight.

Like with most of their other cars BMW also did nothing in order to differentiate the 2017 BMW 330e iPerformance from the rest of the range. The exterior of the car is identical to that of the base 320i with a couple of minor differences such as the electric port on the left side of the car and the blue surround of the front grille.

The inside of the car is pretty much the same and things are a bit worse here as well because a car that costs as much as $45,000 for a base model doesn’t come with pretty much anything as standard besides a climate control system and a screen that displays how the hybrid system works. 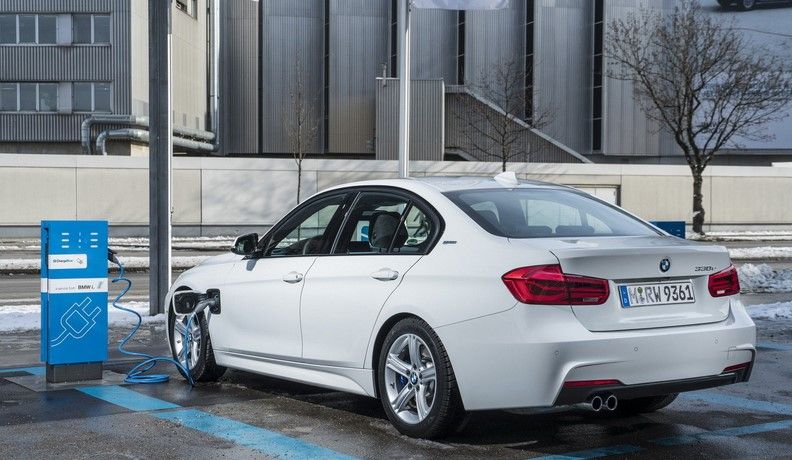 This is a bit misleading because even though the car is a hybrid and it definitely uses less fuel than its petrol engined sibling, it costs nearly $45,000 for a base model and the difference in price is massive considering the rather small fuel savings.