Honda is currently on a roll. Not that long ago they released the new generation Civic while only last month, the brand new Type R was released. Well, it is now for its less powerful sibling, the upcoming 2017 Honda Civic Si. The car has been confirmed to be released at the Los Angeles Auto Show next month, and it should go on sale shortly after that. Just like with its more powerful sibling, the Si is going to be based on Honda’s new modular architecture. This means a more rigid body that will offer the drive more control over the car. However, there will be quite a few more differences between the two than just the engine.

A unique car in its class?

The Si is going to compete with cars like the Golf GTI or Focus ST. However, unlike any of those, the Si is going to be sold, at least for starters, as a coupe. Later down the road, the car is also expected to hit the market as a hatchback and even as a sedan. In any case, the price will likely stay around $25,000 for a base model which is also where most of its direct rivals are. So far the only information we have is on the coupe which has been spied testing in numerous occasions.

Not that long ago the coupe has even been seen with a minimal amount of camouflage on it which suggests that Honda is willing to give us more information in the upcoming weeks.

So far the coupe version of the 2017 Honda Civic Si looks quite impressive from every angle. Even though Honda did soften the lines of the car to end up with the coupe shape, it still looks muscular. The sides boast wide wheel arches with strong lines while the hood further completes that look. The back is a bit more unusual with the typical Civic rear end but despite that the result looks good nonetheless. Over the base coupe, the Si comes with a few additions. The front end has an entirely new bumper with larger fog-lamps housings, new headlights with a new design for the DRLs while the grille looks to be inspired by the Type R as well.

Just above the small splitter, we can also see a small intercooler which confirms that the car will be turbocharged. The back features a more aggressive bumper as well with a faux diffuser and a center-mounted exhaust, the same position as on the Type R. We are quite sure that the sedan, and possibly the hatchback, will be using a very similar styling scheme to the coupe.

The changes are slightly less obvious here. For starters, the dashboard, steering wheel, instrument cluster and even the general equipment level seems identical to the regular coupe. There are a few striking differences, though. For starters, the doors and steering wheel feature leather or cloth upholstery with red contrasting stitching. The seats seem to be the same Recaro units usually found in the TypeR, but these have been likely left unbranded. 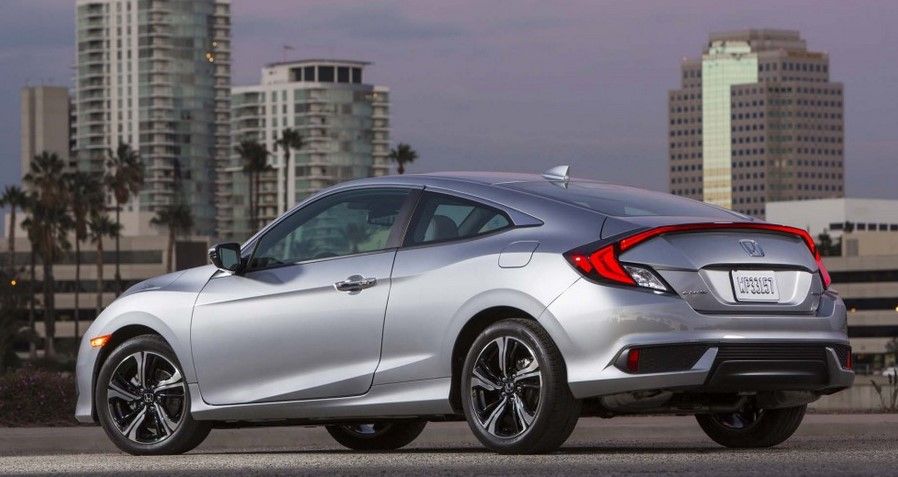 The previous generation of the Si used a large naturally aspirated engine which was fine but not all that impressive. The upcoming 2017 Honda Civic Si is expected to ditch the tradition for turbocharging. That’s right! The car will more than likely use the same 2 liters turbocharged inline four as the Type R. However, in this application the engine will make less power and torque in order to make it a bit more suitable for its class.

At this point, most rumors and pieces of info suggest at an output between 220 and 230 horsepower with more than 250 lb-ft of torque. The car will definitely be front wheel drive while a six-speed manual transmission will be standard. This has been seen on the development mules, and it seems to be the only option, at least for now.

There are no official performance figures at this point. However, considering the output and the low weight, the car will likely be able to outrun some of its rivals with ease. An automatic has also been rumored, but Honda hasn’t said much about this. They do have a new eight-speed DCT gearbox which would be perfect for a car like the Si, but it remains to be seen if they go through with it.