The i8 is one of BMW’s two “i” models, and so far it has been quite successful. Despite being a plug-in hybrid, the car actually competes with cars like the Porsche 911 or the top end Corvette, and it manages to do it while using very little fuel. Even though it has been around since 2014, BMW has been showcasing concept ever since 2009. One of the more interesting has been the i8 Concept Spyder which was released in 2012. However, after the production model was revealed many people forgot about that car.

Things are about to change though because the 2018 BMW i8 Spyder has just been spied testing and it looks quite interesting. The 2012 concept actually had a shorter wheelbase than its coupe counterpart, and it only boasted two seats. The production model of the car will likely borrow at least some aspects from that concept.

For starters, the wheelbase of the Spyder seems to be identical to the ongoing i8. The doors seem very similar as well, and the gaps between the doors and the front and rear fenders seem to be unchanged. Unlike most convertibles, the i8 Spyder will likely be quite similar regarding weight to the regular i8. This would be possible thanks to the car’s carbon fiber construction which is tremendously more rigid than the usual aluminum or steel chassis.

The price is still unknown at it still is unclear if BMW will decide to offer it as a limited edition model. Considering the Coupe costs more than $140,000 in the US and it already sold more than 10,000 units, it is safe to assume they are going to try selling as many as they can. This should allow the “i” brand to grow and we might even see more models from them shortly. 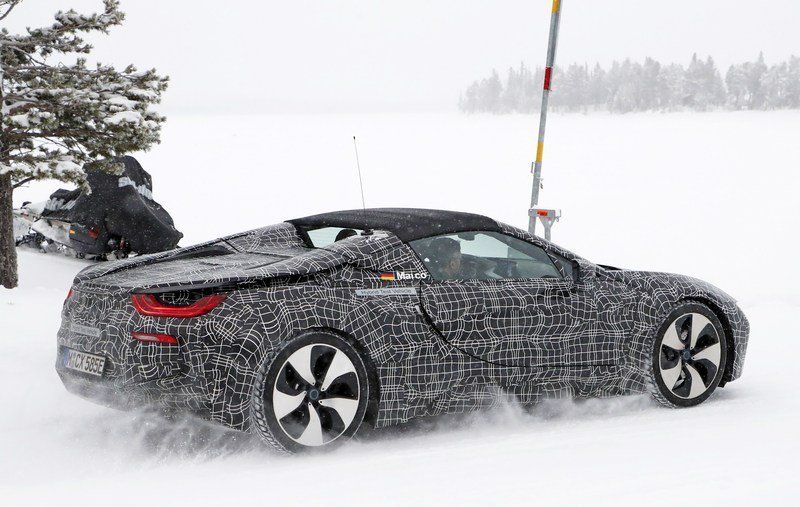 The ongoing i8 is a plug-in hybrid, and there is no reason to believe the 2018 BMW i8 Spyder will change anything about that. The 1.5 liter turbocharged inline three mid-mounted gasoline engine will likely stay. This currently makes 228 horsepower and 236 lb-ft of torque which is quite low, especially when compared to its rivals. This is not the only one, though. The i8 also gets an electric motor good for 129 horsepower and 184 lb-ft of torque.

Thanks to a combined output of 357 horsepower and 420 lb-ft of torque, the regular i8 can easily outrun many cars at the price point. In fact, the car will accelerate to 60 MPH from a standing start in just 3.6 to 4 seconds which is highly impressive. The Spyder will more than likely be very close regarding performance. Even if it is slightly heavier, the car should still be a blast to drive while also being efficient.

The 2018 BMW i8 Spyder actually looks to be incredibly close to the 2012 concept. While some suggested something more similar to the test mule seen a while back, it seems this is not the case. The new version of the i8 will come as a true Spyder. This means it will only offer two seats and a rather impressive overall design.

The rear end will actually be completely reworked. The car’s camouflaged prototype featured two canopies behind the front seats and what seems to be a glass cover. The latter most likely covers part of the trunk, and it may even reveal its tiny 1.5-liter engine. Like before the car is going to feature things like laser-headlights, low-rolling resistance tires on rather large rims as well as near-vertical doors.

All of these will definitely allow the 2018 BMW i8 Spyder to be one of the more desired roofless cars around.

It is safe to assume the Spyder i8 will be mostly identical to the regular version. There will be two major changes here. For starters, the seats won’t have to fold so that we can expect even better seats than before. On top of that, the car will do without a rear set of seats.

Space might be used as a shelf to storage the passengers’ luggage which has been done before by many others. BMW might also offer a special edition with a different interior upholstery and possibly a new steering wheel as well. 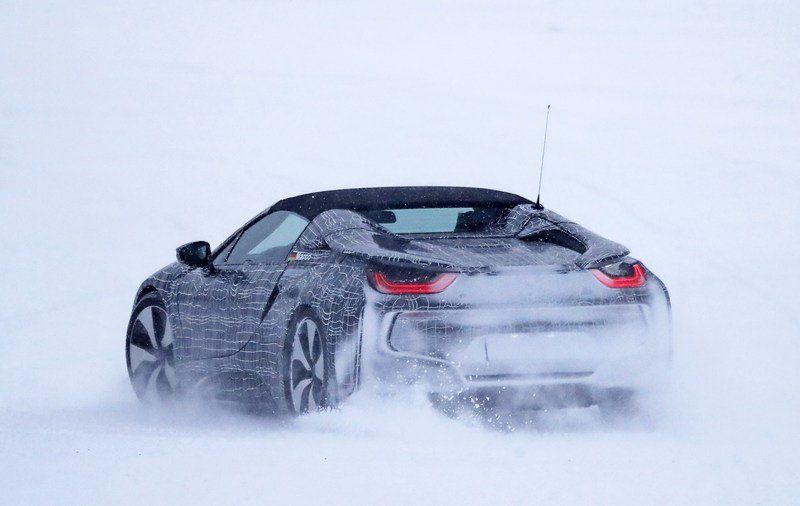