After the Z4 had managed to be one of their more successful cars, BMW decided to offer a successor to the car. However, this time around things would be done a bit more differently. For starters, instead of still calling the car the Z4, they decided to switch the name for Z5. This was first just a rumor, but it was later confirmed by BMW. The new name might mean that BMW wants the car to be a more premium vehicle which also means a higher price.

The Z4 started at roughly $50,000, and the 2018 BMW Z5 is expected to add at least 10% on top of that. This is not, by any means, a cheap car. The large price puts it in direct competition with the Corvette, the Boxster, and the F-Type, three of the best cars ever made.

A rather different aspect of the new Z5 over the Z4 is its chassis. Instead of being a BMW up to its core, the Z5 will share most of its platform and running gear with the upcoming Toyota Supra. This is rather interesting, and it might mean that the new Z5 will also be a lot more capable than the car it is replacing.

The car is expected to hit the market some time at the end of 2017, but it should be fully revealed in the first half of the same year. Over the Supra, or even its predecessor, the Z5 will only be sold as a convertible. Also, the hard-top that was rumored a while ago is not going to be used which is actually great news. 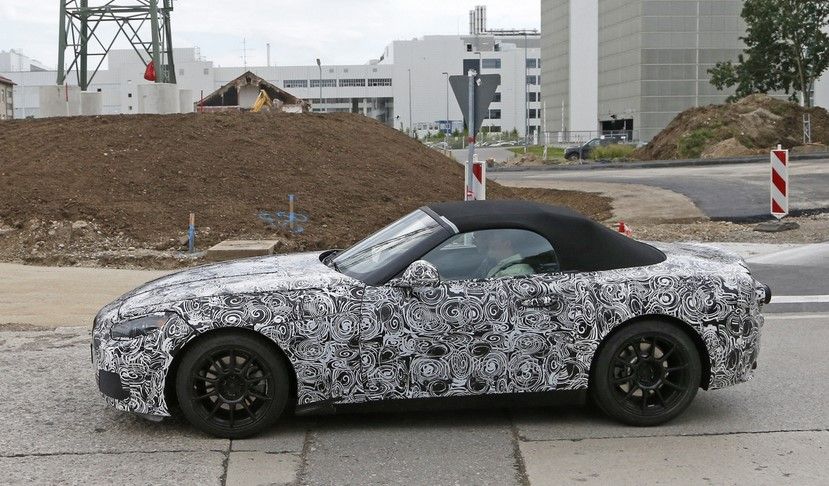 One of the simplest answers to this question would be that the 2018 BMW Z5 will look like a BMW. Most of their current cars do resemble each other, and all of them share design cues. However, there is a small chance for the Z5 to go on a different route. For starters, the car seems to be smaller than its predecessor. It is certainly lower; it also seems shorter, but it might be wider.

These new proportions would allow for a much sportier look. Also, even though the car will definitely be a BMW regarding design, we haven’t seen the usual “kidney-grille” or even the usual BMW headlights. We are quite sure that the roadster we have seen so far is not the Supra because its camouflaged version was quite a bit more different. BMW might offer us a surprise with the Z5, but the result remains to be seen.

The Z5 will be the true definition of a roadster. This means it will only offer two seats and that’s it. We do expect to see a new design from the usual BMW at this price point. Some rumors suggested that the car would take some design elements from the i-Series of cars which would be quite interesting to see. The materials will likely be on par with a 5 Series, and even though it will only have two seats, it should be just as comfortable as its larger sedan counterpart.

With the Supra going for a hybrid engine, the 2018 BMW Z5 is actually expected to go all petrol. This would be done in order to differentiate the two cars, and we are sure that BMW will pull it off. Even though its large price tag, the car will more than likely start its life with a 2-liter engine. We should see a twin-scroll turbocharged petrol engine offering more than 300 horsepower and 290 lb-ft of torque. This would put the car on the same level with the new base Boxster.

On top of that, a 3 liter inline six engine, most likely sporting two turbochargers, should also be offered. This will likely offer north of 400 horsepower and 400 lb-ft of torque, and it will basically be a two-seats M4. However, the car will not be called the Z5M. So far BMW didn’t say anything about an M version. If one is going to be made then, it will more than likely make well over 500 horsepower and it will likely use a V8.

Until then, though, the two lesser versions should be more than enough. Both of them will likely be offered with only an automatic and rear wheel drive. Down the road, a manual version of the car might be offered in certain markets as well.

The RS5 has been Audi’s response to the M3, and later M4. However, because the car was actually released back …

Are you ready for one more supercar by German automaker? Here’s the latest monster, named 2018 Mercedes AMG GTR. At …