The 4th generation of Ford’s Super Duty line of trucks has been unveiled back at the end of 2015. Since then the trucks didn’t change a bit, but that was to be expected. It now seems an update might be on its way. So far we only information about the 2019 Ford F-450 being spied. Despite being quite early, it looks like the truck will receive a few improvements which are all going to be carried over to the lesser 250 and 350 versions of the F-Series of trucks.

The chassis is likely not going to change much, but that’s to be expected. The new F-450 is more than likely going to boast the same boxed-in ladder frame chassis which has been released more than two years ago. This provides the structural rigidity the truck needs to tow as much as 30,000 pounds or more in some configurations. A couple of weeks back the truck has been seen testing around Michigan, and it was quite interesting. This was clearly a new truck as its frame looked really clean for a test vehicle. This likely means Ford is barely putting on the finishing touches on it. Even though it was camouflaged, we were able to see a few interesting details about the upcoming F-450.

Not that long ago Ford revealed the new F-150 which had its front end loosely based on the ongoing Super Duty range. For the upcoming 2019 Ford F-450, it seems the truck is not going to retain all that much from its predecessor which is really interesting to see. Through its camouflage, we can clearly see a new grille shape which hasn’t been used before on Ford’s trucks. This is a hexagonal shape, somewhat similar to that on the Raptor, but it boasts a large horizontal slat at the top of it with the Ford badge being right under it.

The end design looks to be quite a bit more aggressive than the one before it which is an interesting move by Ford. With the new grille, we can also expect a different hood and new fenders. Most suggest the fenders are going to be slightly wider in order to allow Ford to install wider axles than before. Unfortunately, this is barely a rumor for now, but we wouldn’t be that surprised about it. 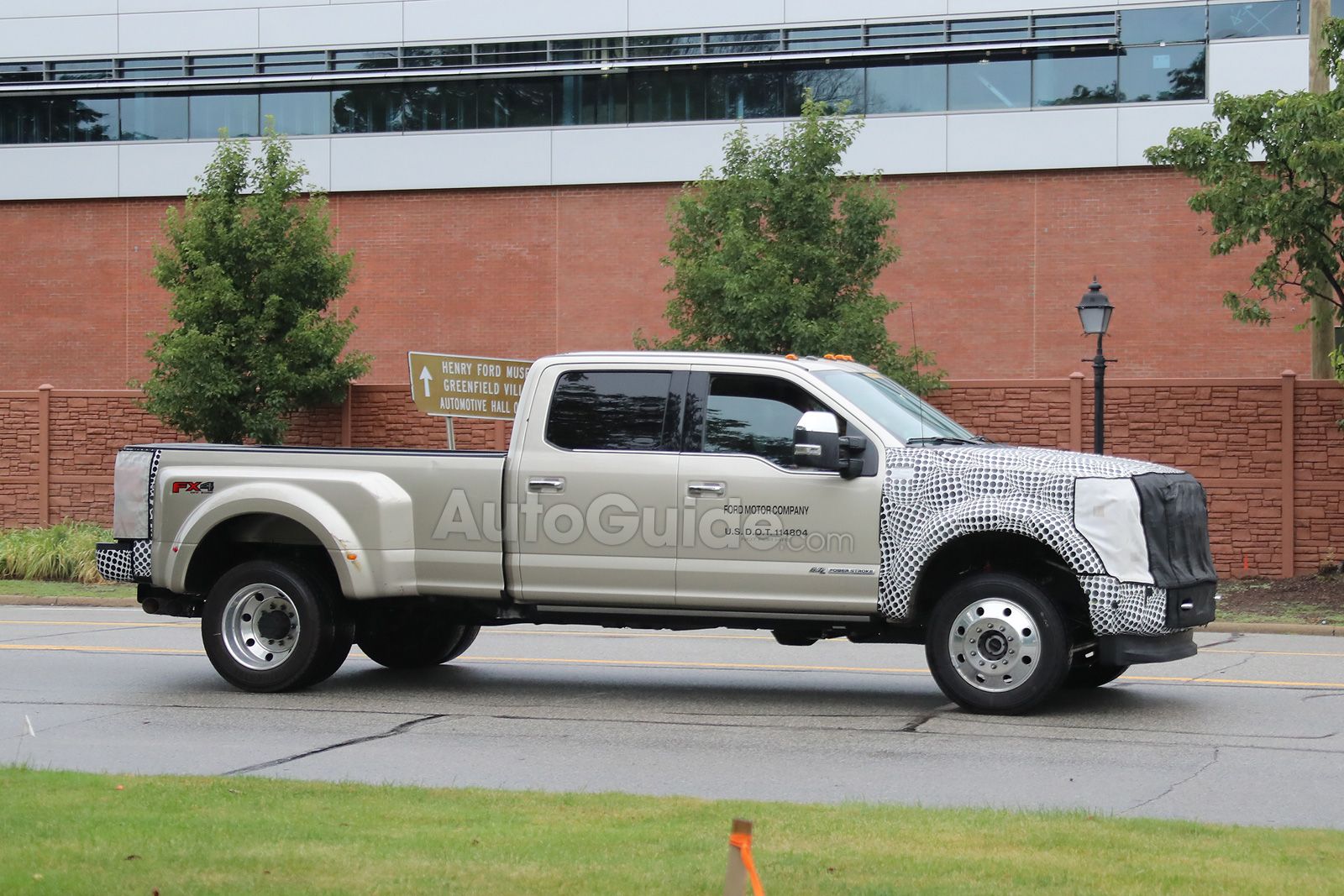 Even though nothing is official, it looks like the spied 2019 Ford F-450 may feature a new engine which was previously unavailable. The truck boasts the same bumper opening as all the F-150 EcoBoost models which is quite interesting to see. A similar intake has been used before for the 6.7 liters turbocharged V8, but this had a much larger grille. The new truck seems to boast a slim and narrow grille which could suggest a brand new 3.5-liter engine being used. This would likely be added as an alternative to the older 6.2 liters naturally aspirated gasoline V8.

While this is still great for what it is, the engine is no longer compliant with the latest fuel efficiency standards. Because of that the 3.5 liters EcoBoost, with more than 400 horsepower and 450 lb-ft of torque, would provide an increased output while also being more efficient. With the new engine, it also seems Ford’s latest ten speed automatic may be used on the F-450. This would give the truck quite a bit more versatility than before, and it would allow the driver to make better use of the engine.

The most powerful diesel to date?

It seems the 2019 Ford F-450 may receive an updated 6.7-liter turbocharged V8 diesel which will eventually be used on the lesser models. At this point, most rumors suggest the truck is going to provide north of 450 horsepower and as much as 1,000 lb-ft of torque. This would make it the first truck to offer as much torque.

While this would be great, there are challenges with this. In order to handle all that power, the truck’s chassis is likely going to be strengthened which would make the diesel even heavier than before. Also, the ten speed automatic is unlikely going to be able to handle that much torque so we may actually see an Allison automatic in this particular application

Ford makes available rides with powerful engines, which provide towing and hauling capabilities. It is one of those companies that …