Released back in 2009, the current A8 can’t really match the newer competition. However, it still is one of the best handling cars in its class and it still feels upmarket. Its age is starting to show in some other areas such as the weight, fuel economy or some of the features offered inside the cabin. The Audi A8 2016 is also the last one of this generation. The car will be replaced by an entirely new model early next year. Until then, this model will fill in the space in Audi’s roster but with quite a bit of success.

There are plenty of models to choose from and the price range goes from around $80,000 to well over $120,000. At this price point it can’t really match the likes of the new S-Class or 7 Series mostly due to the outdated technology offered inside.

We would say that the A8 still drives better than any of its rivals. While the two other German rivals have been heavily revised, none of them can really match the A8. This is more composed on the road, it provides a much better driving experience and it feels lighter than its 4,400 pounds. However, with that great driving character, the car also loses on comfort. The A8 is not as good as either of its main rivals in terms of comfort and it can’t really match them when it comes to the cabin’s insulation.

In fact, we would say that the current A8 feels a lot more like a larger A4 which is not exactly great on a car that can cost more than $100,000. The new model is set to solve these issues but until then there is not much that people can do about it.

While we generally agree with Audi’s conservative styling, we would say that the A8 looks too much like an older A4 or A6. This problem can also be seen, to a larger extent, on current Mercedes or BMW cars. Unfortunately it seems that this trend is set to continue in the future as well. The 2016 Audi A8 is pretty much identical to the original model. The grille has been slightly updated while the headlights, tail lights and the rims are new. This doesn’t change the fact that the design aged quite a bit though. The S8 model adds a bit of flair but we still do think that the car is a bit too understated for what it has to offer.

This is likely the largest problem for the aging model and it won’t change, at least for this generation. The interior of the Audi A8 2016 is quite minimalist in terms of design and the materials are not on par with the competition. There is plenty of cheap plastic on certain buttons or hard-to-reach areas which does take from the experience. The dashboard features a really clean look and the pop-up center display makes for a really nice look with it down.

Most of the buttons are on the lower-center console while the instrument cluster is the usual analogue one found in the older Audi cars. This will change for the upcoming model but it won’t for the current generation. The good part is that there is plenty of space both on the front and rear seats. Audi also offers a longer “L” version with even more room for the back. 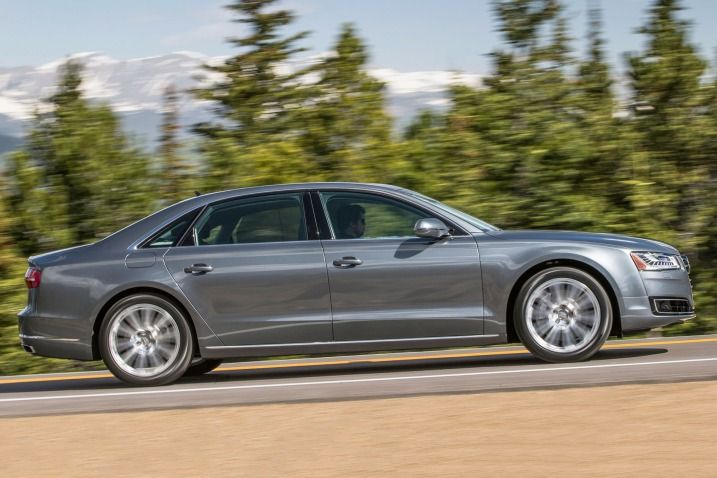 The US market model gets one of two engines. There is a supercharged 333 horsepower 3 liter V6 or a 450 horsepower 4 liter twin-turbo V8. Both get all wheel drive as standard and both of them come with a standard 8 speed automatic. The S8 gets the same 4 liter twin-turbo V8 but it has its output boosted to as much as 605 horsepower and 517 lb-ft of torque in the performance package model.

This is considerably more than the competition and together with Audi’s great chassis, it makes for one of the best driving experiences around. Like the others, this also gets an eight speed automatic with a tweaked software. The European market also gets a choice of diesels which range in power from around 200 horsepower all the way up to 300 horsepower.

Mercedes has always been the exclusive carmaker that every other manufacturer tries to catch up to in technology, performance, and …