We can say for sure that the Cayenne together with the Panamera are the two cars that allowed Porsche to pursue their dream with the rear-engined 911 and we have to thank them for that. However, their two best selling cars are a bit dated now so a massive redesign is under works and from the looks of it, the Panamera is going to be the first one to be released, most likely with the future 2018 Porsche Panamera. Despite the fact many rumors suggest for VAG’s MSB modular platform, it seems that the new Panamera might be using a Porsche-derived platform for their future front wheel drive cars.

The new platform would make the new Panamera lighter, more rigid and it should allow Porsche to offer more space inside the cabin without compromising the looks or handling of the car.

So far we know from the spy shots of the upcoming 2018 Porsche Panamera that the car is slightly longer than the ongoing generation and it is wider as well. Even though this isn’t obvious from the test mules we’ve seen so far because Porsche elongated the body of the car in order to make this change as subtle as possible.

The total weight will likely drop as we said above but the car should retain a close to perfect weight distribution. The price is unlikely going to change much but this is Porsche and things might certainly change in the future.

The only engine we know for sure that will be powering the upcoming Panamera is an all new V8 which has been developed from Audi’s new 3 liter V6. This means that the V8 is modular so it will likely be a 4 liter V8 unit which could be available with or without superchargers. Considering that the base model doesn’t need that much power, we might be surprised by Porsche with a 4 liter naturally aspirated V8, that would rev up to 8,000 rpm, in the base model.

This would easily be more interesting and likely quite a bit faster than the engines in its competitors. The top of the range Turbo and Turbo S models are certainly going to make use of a turbocharged version of the same V8 which could be capable in excess of 700 horsepower and 600 lb-ft of torque.

A hybrid is also going to be offered on the upcoming car but the details about this are still scarce. We do know however that the car’s diesel offerings are going to be heavily updated with Audi engines and this time around Audi’s most interesting engine yet, a tri-turbo 3 liter V6, might be offered in the Panamera which would become really interesting to see indeed. 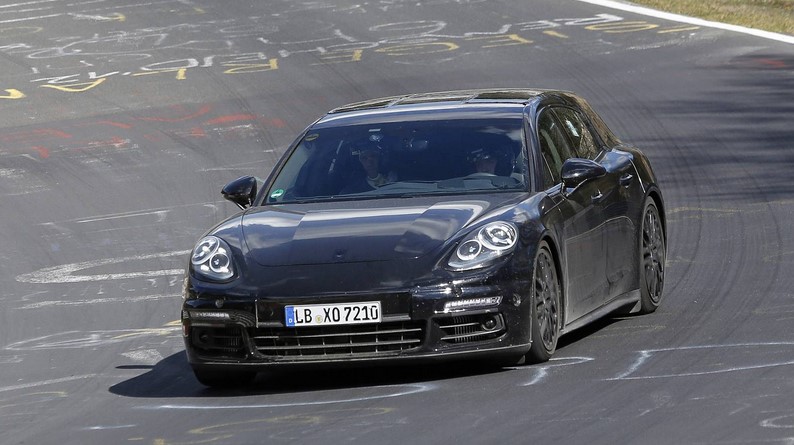 The Sport Turismo concept as well as the Mission E are likely the closest we came so far to the final design of the upcoming 2018 Porsche Panamera. Despite the car will be slightly larger than before, it seems that Porsche wants to offer a more subtle design that would make the Panamera seem smaller than it really is.

This would be a great improvement over the current model which looks a bit too unusual for most people to like. Inside the cabin on the other hand it is quite safe to assume that Porsche is going to use their usual design cues, so don’t expect any major changes over the Cayenne or even the 911 series.

There are several options if you decide to take your precious wheels with you when you move out. You can …