Not that long ago the Countryman has been heavily updated with pretty much all new parts. Despite that the new car won’t be left alone for more than a year at a time. It seems that the upcoming 2017 Mini Countryman JCW will receive a bit more attention. Not that long ago a camouflaged test mule has been spied, and it looks to be the future JCW model.

This is currently missing from the market, but it shouldn’t take long before Mini releases it. The 2017 car will hit the market some time near the end of 2016. Its base price won’t change but the JCW might.

Over the first generation of the car, the new Countryman has a lot more in common with the regular hatchback. This means that it is also lighter, it makes use of a car-like running gear, and it is also much better to drive. The JCW will allow Mini to get everything to a new level. Not only the engine will be updated here. Instead, the car’s entire mechanicals will get small revisions. The JCW is expected to be around 10 to 15mm lower than the ongoing base model. On top of that, it will definitely come as standard with large 19-inch rims wrapped in high-performance tires. These will definitely be needed as the car will also provide quite a bit more than the regular version.

As we mentioned above, so far Mini hasn’t said a word about this upcoming car. However, it is clear that the camouflaged version is something a bit more than just a small update. Why? Well, for starters, it has been spied on the Nurburgring. This means that Mini is definitely trying to make it quite a bit faster than the current models. On top of that, it is definitely lower and also features some interesting body panels. 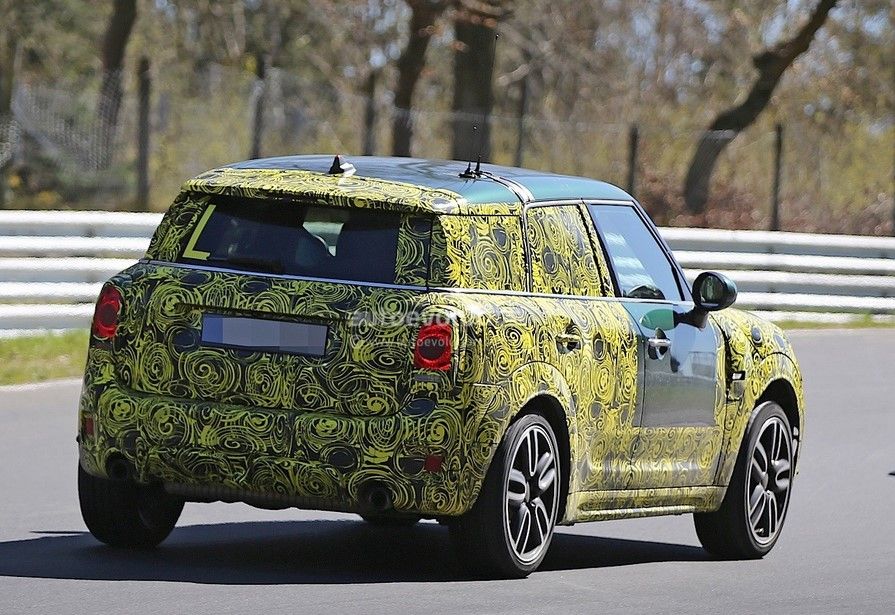 The production version of the car will most likely be even more impressive. It seems that the test mule is still missing some features. For starters, the production car will definitely make use of wider wheel arches. This is because it should come with 8 inch wide wheels wrapped in 245 section tires. These will give the 2017 Mini Countryman JCW plenty of grip in any situation and also a lot of feedback to the driver. Other upgrades over the base model will include a small splitter in the front, a large wing at the back which should help with cornering grip. The end design will be revealed near the end of the year. Despite that, it is quite safe to assume how the car will look and what options Mini is going to include with it.

Like with any other JCW model, the upcoming Countryman should feature a more interesting interior than the base models. The basic shell of the dashboard will be the same. Also, the actual equipment level should be quite similar to that of a premium version of the car. Things like dual-zone climate control, electric windows all around the car, privacy glass, all the usual safety features as well as plenty of driving aids. These may not be to everyone’s liking, but it will make the car easier to drive for a larger portion of the market.

Let’s now move to the most exciting part of the upcoming 2017 Mini Countryman JCW, its powertrain. The previous JCW used the same engine as the Cooper S with minor modifications made to it. The upcoming model should be no exception either. The car is expected to get a 2 liter turbocharged inline 4 petrol engine which can also be found in the regular JCW Hatch. There has been no word on the output of it but considering the two cars are nearly identical, we expect it to offer close to 228 horsepower and 236 lb-ft of torque. Because the car will be virtually identical to the X1, an eight-speed automatic is definitely be the only option here. A manual has been offered in the past with the JCW models, but Mini said that automatics are the future. While we tend to agree with this statement, a manual in a sports car is definitely a must.

Unlike the hatch which is only available with front-wheel drive, the 2017 Mini Countryman JCW will be a bit more special as it is expected to offer an all-wheel drive version. Not much has been said up to this point, but it seems a crude torque vectoring system could be added to the mix. This will further improve the way the car drives, and it should make it faster than before. There are problems, though, and one of the largest is the price.

Being expected at above $37,000, the Countryman is one of the most expensive cars in its class. On top of that, despite being a crossover, it ‘s not large. In fact, inside the cabin, there is less space than in a Focus. The problem here is that for around $35,000, the Focus RS can be bought. This is usually a far superior car in every way which most people are going to prefer over the tiny British crossover with its funky looks.

Starting at roughly $36,000, the new Countryman might get that price closer to $38,000. This is a rather significant amount of money, but then again, the Mini is more of a statement than a car. Those who buy it get a bit more than just a way of transport. The JCW will make no exception. Also, in the larger price tag, there should be more equipment, a new engine as well as a vastly improved running gear. All of these will make for an easier car to live with and not necessarily a faster one.

It still is unclear at this point how many models Mini is going to build. However, it seems that the new 2017 Mini Countryman JCW will not be offered in a limited number. This is great as it will allow everyone is getting it. However, its value over time will go down much faster than it would otherwise.

Even though Mercedes had a few hyper-cars in the past, they don’t really have one now. Their only high-performance offering …