When it was released a few years back, the Raptor was the only truck of its kind. There have been a few tuning companies out there that offered heavily modified versions of GM and RAM trucks, but none of them was a factory model. Later down the road, RAM released the Rebel, a highly stylized version of the 1500. Unfortunately, this lacked the off-road prowess or the power of the Raptor. Well, it seems that this is about to change because a few weeks ago they released the 2017 Ram Rebel TRX Concept. Even though nothing is official at this point, the truck seems to be the perfect competitor for the Raptor. It looks to have the same type of market in its sights, and it even looks on par with the best out there. 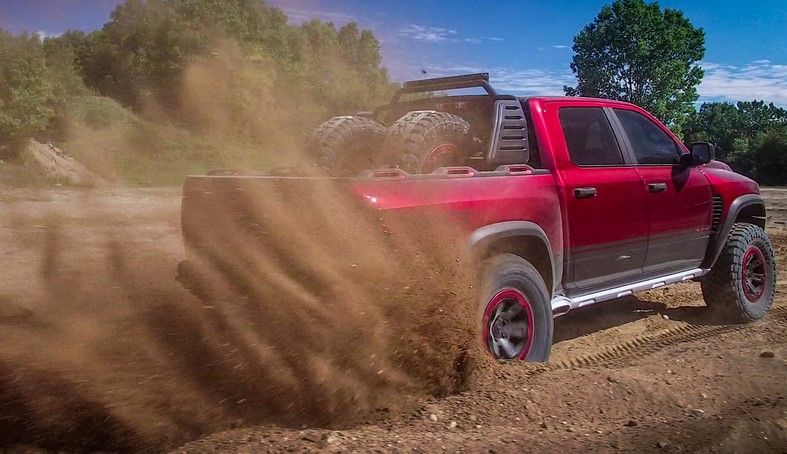 Will it ever be made?

The interesting part is that even though it is a concept, RAM didn’t dismiss the rumors about it being made. This gives us hope that another large truck manufacturer will offer a niche high-performance truck on the US market. There is still nothing official at this point, but there is some good news. The Rebel TRX is using a lot of off-the-shelf parts which would allow RAM to build it without investing too much in tooling or research and development.

On top of that, it doesn’t look all that different, at least for an untrained eye, than the regular Rebel. In order to be competitive with the Raptor, the Rebel TRX would have to cost around $50,000. Unfortunately, though, the regular Rebel starts at nearly $45,000 which means it will more than likely go north of $60,000 or even more.

Even though $60,000 or more might seem unreasonable for the 2017 Ram Rebel TRX Concept’s production version, there are some very interesting facts about it. The truck is more powerful than the Raptor, more capable and it comes with a lot more gear. The production model might be changed slightly, but the end version should be quite similar to it. The large 37-inch off-road tires, the light alloy rims, side exhausts, flared wheel arches and accessories might all be offered as standard.

Also, the TRX gets a roll bar, a LED flood-light, two spare tires identical to its wheels as well as a revamped front bumper. The production model might be offered without the two spare tires, but everything else should be available in one form or another.

Just like the Raptor, the TRX gets a nearly identical cabin to the regular model with a few exceptions. The steering wheel is the same as that on the Hellcat Charger. The seats offer a lot more lateral support than before, and the entire cabin has been covered in Alcantara. The gear knob, as well as some buttons, have been replaced by red accented units as well. The result is a truck that is still a RAM, but it looks, and feels, a lot sportier.

While the usual Rebel gets a 5.7 liter with less than 400 horsepower while the Raptor gets a 3.5 liter with 450 horsepower, the 2017 RAM Rebel TRX Concept is a bit more special. The truck gets a 6.2 liter supercharged V8 petrol engine. This is the same unit found in the current Hellcat models. However, in order to better fit this application, Dodge decided to tone it down to 575 horsepower and an undisclosed amount of torque. This should be enough to make the TRX faster than the Raptor by a sizable margin. The V8 is mated to an eight-speed automatic gearbox and a four-wheel drive system. The latter was thought not possible until recently, but RAM proved once again that they cam deliver.

The engine is not the only upgrade. The TRX gets as standard improved shocks with external reservoirs and internal bypass, beefier springs, much larger brakes with six-piston calipers as well as limited slip differentials. So far the actual performance has not been disclosed, but Ram said that the truck would hit 100 MPH in any conditions. Considering the output of the engine, expect it to get to 60 MPH in around 5 seconds or less with a limited top speed of around 120 MPH due to its off-road tires.

If you are a Jeep lover that always looking for cool auto gadgets and accessories, visit: https://www.jeepzine.com/best-cold-air-intake-for-dodge-ram/.