The all new Raptor has been released for nearly two years now, but it went into production quite recently. The car is large, powerful and quite impressive on the road but it seems it just isn’t enough for some. In order to please everyone, car development companies already started working on it. One of the first results is the 2017 Hennessey VelociRaptor 6×6 which is one of the most impressive trucks we have ever seen. It had only been showcased by the American tuner a couple of days ago, but it already managed to take the press by surprise. The 6×6 is based on the regular version of the Raptor which has been extensively modified, similar to what AMG did to the G-Class 6×6.

But is it worth it?

Like with most other specialty vehicles, the 2017 Hennessey VelociRaptor 6×6 is a real niche vehicle, so it can’t be said that it is worth it. However, for those really wanting one, it might make sense considering it offers something that isn’t available on any other truck. Unlike with the highly luxurious AMG, Hennessey seems to have worked quite a bit on the running gear and engine, so it should be very capable in off-road. The exterior has definitely changed from the base Raptor. The grille, headlights and most of the cabin are the same as on the regular model. However, the 6×6 does come with new front and rear bumpers made out of a combination of steel and aluminum. These should offer superior protection and better departure and approach angles. All the exterior ornaments have been blacked out across the range even though there are a few different available colors.

Not much has been said about its interior, but if we take a look at their other products, it is safe to assume that the 6×6 will come with minimal changes. Expect contrasting stitching and slightly more customization options such as better speaks or different upholstery that will only be available on request.

Hennessey will sell you additional lights and some upgrades for the exterior, but things like the Fox-racing shocks with external reservoirs, the unique 20-inch alloy rims or the six-lugs hubs are all offered as standard. Even though the wheels are very large for a truck like this, all terrain tires will be offered which is unusual. It is also worth mentioning that the VelociRaptor 6×6 is noticeably wider than the regular truck. Combining this with the longer chassis will result in it not being able to navigate certain tight areas. 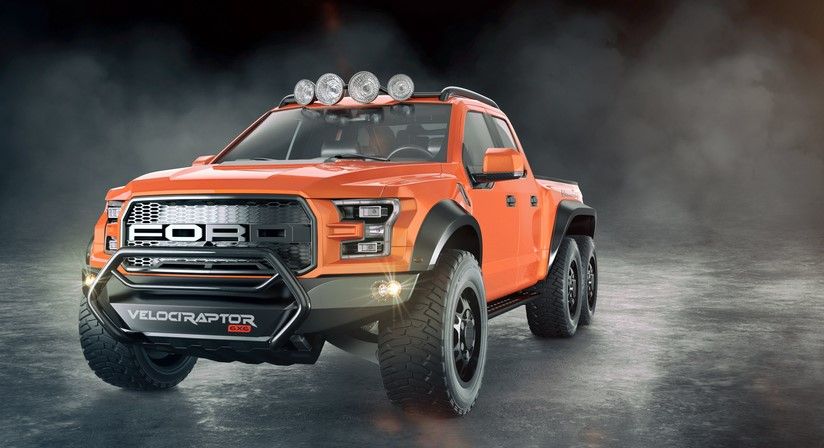 One of the largest additions for the 2017 Hennessey VelociRaptor 6×6 is the third axle. This has been fitted be mounting a longer bed and altering the chassis. Also, in order to give it superior off-road capabilities, there are multiple locking differentials which should improve the traction tremendously. The brakes have been beefed up as well and even though not official at this point, the axles are more than likely those found on the beefier F-350. The engine, at least on the base 6×6, is the same 3.5 liters twin-turbocharged V6 as on the regular Raptor where it makes 450 horsepower and 510 lb-ft of torque.

The optional Performance package will add better turbochargers, a beefier intercooler as well as a less restrictive exhaust. The result for this will be 600 horsepower and more than 600 lb-ft of torque. In any case, Hennessey decided to keep Ford’s 10-speed automatic gearbox in place. This is stronger, faster and noticeably smoother than the older 6-speed units.

Like with most other specialty vehicles, the price tag for the 2017 VelociRaptor 6×6 is astronomical. Hennessey advertised a starting price of $295,000 which also includes the donor truck. This is very close to its 6×6 AMG counterpart which sold out in a matter of days. It still is unclear at this point how many units will be built, but considering the price, it is safe to assume that not all that many.

There are a few customization options for it, the most expensive being the Performance upgrade which will set you back an additional $22,500. This will put the total price of the truck to $317,500 which is nearly six times the base sticker price of a regular Raptor. 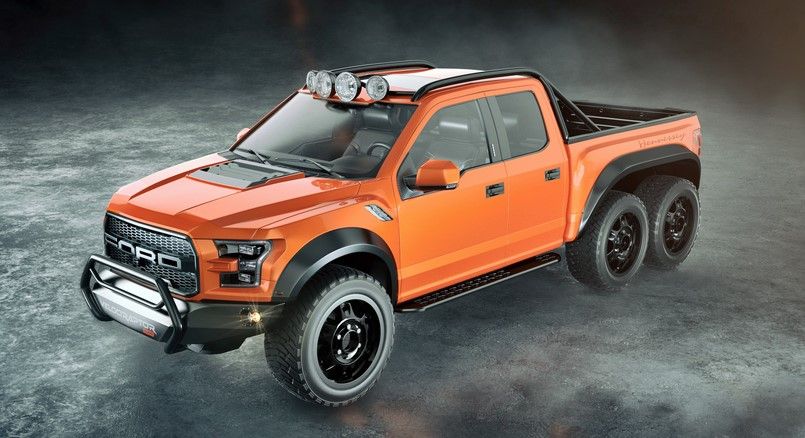