The CR-V is one of Honda’s best selling models and up until a few years ago it was the best selling compact crossover in the World. However, in the meantime, newer models such as the new RAV4 or the new Escape managed to snatch a good part of its customers. Being released back in 2011 many people expected from Honda a mid-life update of the car but instead it seems that an entirely new model is in the works.

The upcoming 2018 Honda CR-V will certainly be what Honda needs to get back at the top of their class but let’s just hope that their idea will come to fruition and it will not be lost among many other great ideas they had over the years.

Instead, Honda seems to want to release the CR-V in two different versions, with five or with seven seats but unlike most other manufacturers which offer their cars in two wheelbases, Honda will only offer one which means that the five seats model will offer more legroom in the back and a bigger trunk than the seven seats version.

This is a really interesting concept for the upcoming 2018 Honda CR-V because it will allow them to focus on making a great car and not just two average models of the same car. In terms of weight the new model is actually expected to shave a few pounds from the ongoing model thanks to the use of a new platform and new materials such as higher strength steel and aluminum in some key components.

A departure from their regular practice of offering their US models with a single engine choice, this time around Honda is expected to offer two different engines in the CR-V but unlike some of their competitors, both of these engines are going to be available for the two different models. The base car is likely going to make use of Honda’s new 1.5 liter turbocharged inline 4 petrol engine which has been released quite recently. This will make around 180 horsepower and 190 lb-ft of torque which is just as much as the older 2.4 liter inline 4.

However, the new turbocharged mill should use less fuel, and it should feel zippier thanks to a larger amount of torque available from down the rev-range. The top end models, on the other hand, are expected to use a 2 liter turbocharged inline 4 version of Honda’s new engine which is going to make close to 240 horsepower and 260 lb-ft of torque, enough to take head on its V6-powered competitors. Let’s just hope that they will go for a nine-speed automatic instead of the older CVT units.

Looking like a Civic on stilts, the current model isn’t exactly the best looking SUV out there. The new 2018 Honda CR-V is going to be quite a bit more different and it will feature a more aggressive look as well as cleaner lines which will continue inside the cabin where the materials are going to be even better while the general feel of the interior will be that of a more expensive car. 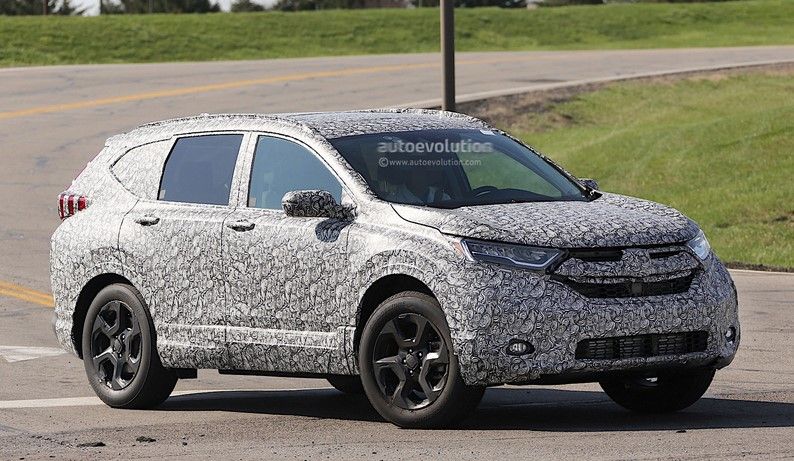 The price for the regular five seats version shouldn’t be affected but the car with seven seats might cost around $2,000 more than the ongoing car which would still make it the cheapest seven seats crossover on the US market by a really big margin.