Not too long ago the 500 line of cars has been updated quite extensively so the new Fiat 500 looks better, has a nicer interior and its engines have been brought up to date. However, the car everyone was expecting has been updated only a few weeks ago with the 2017 Abarth 595 which is the direct successor to the Fiat 500 Abarth.

The new model is more aggressive than before but besides that it features roughly the same design changes that can be found on the new 500. The great engine of the older model has been further refined and its interior is a bit more welcoming but this doesn’t change the fact that the great little car has been on the market for nearly a decade now and this is clearly obvious when we look at some of its direct competitors.

Like we said, the basic 1.4 liter turbocharged inline 4 engine is the same as before but this time around the 2017 Abarth 595 features an entirely new turbocharger across the range. This is now provided by IHI instead of Garret and thanks to that the base model now makes 145 horsepower and 151 lb-ft of torque which is a 5% improvement over the older car. Further up the range there are two additiona models. The Turismo has the same engine but this time around with 165 horsepower and 170 lb-ft of torque while the

Competitione will offer up to 180 horsepower and more than 180 lb-ft of torque which is highly impressive from a tiny 1.4 liter engine. All of them can be had with a 6 speed manual gearbox and front wheel drive only but only the range topping model will be available with a limited slip differential, a first for the tiny model. When equipped with it, the car will hit 62 MPH in 6.7 seconds, faster than a lot of fast hatchbacks and certainly faster than any other production 500. 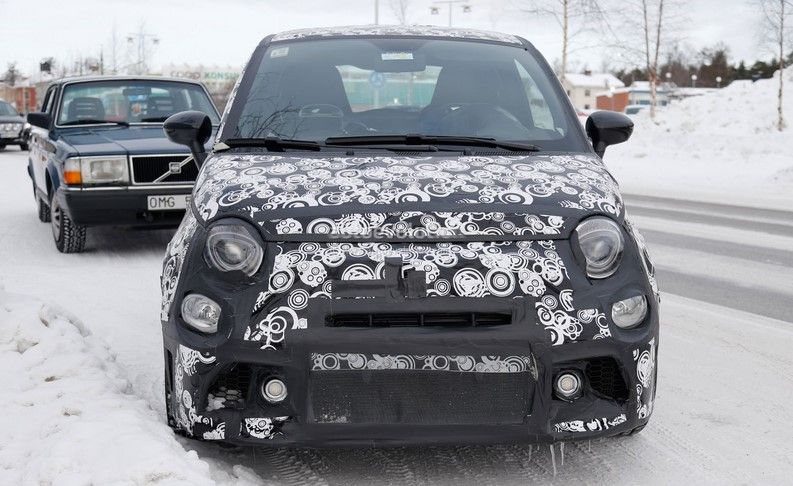 Due to the fact the 595 is basically a Fiat 500 with a lot of muscle pumped into it, it looks a lot like the small city car. The front end features the same new styling cues that can be found on the cheaper model but in order to differentiate it and offer a more aggressive look it now features an all new bumper with larger air intakes which provide around 20% more cooling to the engine.

On top of that, the sides of the car are wider due to slightly bulging wheel arches and in the back a quad exhaust system is being fitted as standard. A small roof spoiler as well as a rear diffuser help with the downforce while the standard 17 inch rims which should cool the brakes better than before will help put all that power to the ground.

The price is still unknown considering that the car will become available in showrooms starting with the mid of 2016 but it is safe to assume that it will cost roughly the same as before at around $20,000.

Probably the area where the 2017 Abarth 595 doesn’t look like an over $20,000 car is inside the cabin where it is nearly identical to the regular model. Here the seats have been upgraded in order to provide a better driving position but besides that the car still looks like a fancy city car.