After they had a lot of success with their small city cars, Citroen decided to tackle the higher end market. At first, the French company released DS versions of their cars but later the DS brand was actually released as a standalone brand. In the present DS has a handful of cars which are quite impressive, especially when we compare them to some of their German rivals. To become a fully-fledged rival, though, DS is set to receive at least a couple more models in the upcoming years. One of these will be the new 2018 DS 7 Crossback which was showcased a few weeks back.

The car is a mid-size luxury crossover, and so far it seems to be quite impressive. Not only the car will be released in Europe first, but it seems it may also hit the US shores. This hasn’t been confirmed but considering DS’s lineup of cars; it is safe to assume that it will happen at one point shortly.

Despite being aimed at highly premium cars, the DS 7 still gets the usual Peugeot/Citroen platform. The EMP2 modular architecture allowed them to offer a longer than usual wheelbase and also give the car very good NVH levels. While it does share quite a few components with its cheaper siblings, it seems DS redesigned the running gear in order to better fit the car’s behavior.

It also gets a rather stunning interior and a very imposing exterior. Up to this point, the price hasn’t been revealed, but its rivals all cost over the equivalent of $30,000.

While we understand Citroen’s desire to allow their DS brand to succeed, this might not be the right move. Why? Well, the 2018 DS 7 Crossback seems to combine multiple cars into one. For starters, the front end features a massive grille which continues all the way down into the bumper. A set of vertical LED DRLs accentuate the bulky lines while the large, yet swept back headlights, make the DS 7 seem wider than it really is.

The only real drawback is that Lexus did the same with the RX a while back and the similarities between the two are quite clear. The rear of the DS 7 has also been slightly criticized for looking a bit too much like a Q5. The tailgate has a nearly identical shape, and the headlights lift up with it. However, DS also added some interesting details. The bumper is much sportier than on the Audi while the vertical rectangular exhausts are definitely unique.

This is where the 2018 DS 7 Crossback manages to depart from all of its rivals. Instead of going for the usual European-look with the curvy dashboard and clearly laid out controls, DS did something unique. The dashboard follows the curvature of the windshield, but everything else sports clean, sharp angles.

The steering wheel, HVAC vents, gear selector, buttons, navigation console and center stack all make heavy use of rectangular accents. The materials also seem to be quite impressive with leather covering the most of the interior. Aluminum has also been used on most buttons, so the 2018 DS 7 Crossback definitely has the edge over most other cars at its price point. 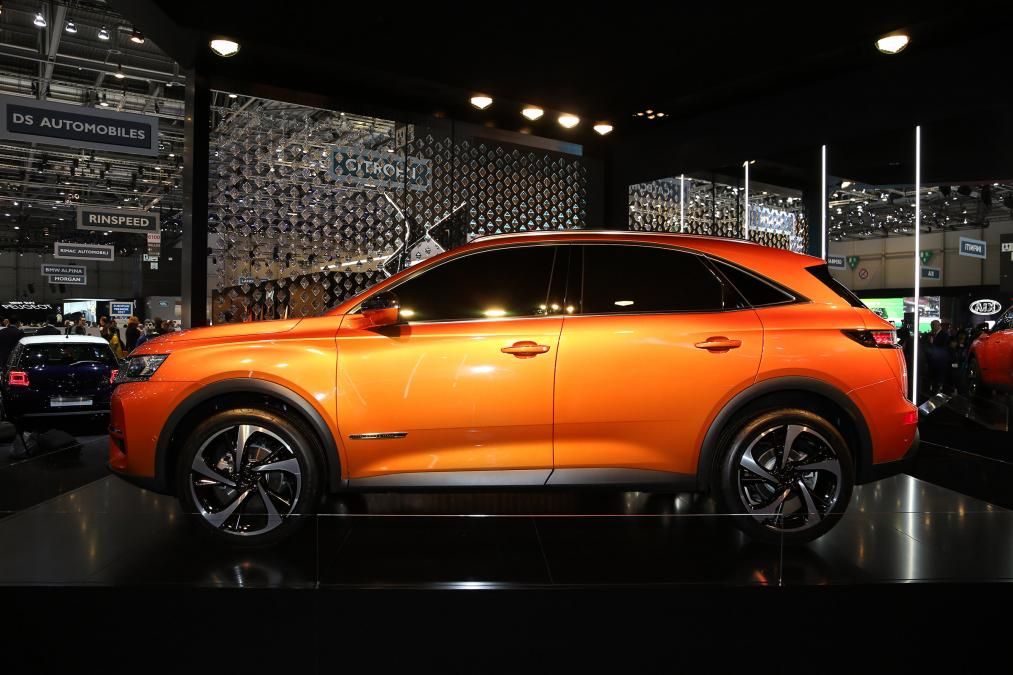 Unlike most of its rivals, the 2018 DS 7 Crossback will come with rather interesting engines. The base model will receive a 1.2-liter turbo-three with 128 horsepower. A 1.6-liter turbo-four with either 178 or 227 horsepower is also going to be available. Even though diesel engines are phased out by some manufacturers, DS decided to include 2 with the upcoming DS 7. The base 1.5-liter diesel will offer 128 horsepower with the higher end 2-liter unit offering 178 horsepower.

A six-speed manual is actually going to be offered as standard on the base 1.2 and 1.5-liter engines. All the others are going to receive an eight speed automatic which will drive the front wheels as standard. So far the PSA group said that they don’t want a conventional all-wheel drive system.

This most likely means that the rumored AWD version will use a hybrid system. This would be able to drive the rear wheels via an electric motor, so the transmission losses will be kept to a minimum.