Even though Challenger sales boomed back in 2015, once the new generation of muscle cars has been released, the sales started to decline in 2016 and 2017. This is mostly because the car is old. It has been unveiled back in 2006 and released on the market in 2007, so it is more than a decade old at this point. A successor is definitely in the works, but Dodge didn’t say all that much about it. However, it seems that the new model might be released as the 2019 Dodge Barracuda and it may have absolutely nothing in common with the current car.

Let’s not forget that all new muscle cars are smaller and lighter than their predecessors. The Challenger is the last remaining true muscle car weighing at over 4,400 pounds in certain trim levels. That is just too much for a car that aims to be the best offering in its class.

Its successor, the Barracuda, is not only going to be lighter but also more powerful. The car is actually expected to be based on Alfa’s Giorgio platform. This rear wheel drive chassis is an all aluminum design which is not only considerably stiffer than that of the Challenger but also lighter. The Alfa sedan weighs in at little over 3,000 pounds, more than 1,400 pounds less than the Challenger. Even if Dodge ends up installing heavier engines, beefier suspension components and more features inside, the car is highly unlikely going to weigh more than 3,500 pounds.

Because of that, it has the potential to become one of the better driving cars out there, especially since the Giorgio platform is regarded as one of the best rear wheel drive chassis around. The price is still unknown at this point but all things considered, it is safe to assume it will cost between $28,000 and north of $70,000 for its high-performance versions.

So far it seems most people think the 2019 Dodge Barracuda is going to look completely different than its predecessor. In fact, some even suggested a typical GT-look with a long hood and a short rear end. While this is definitely possible, we wouldn’t bet on it. Considering how successful the Challenger was, it wouldn’t be that far-fetched for Dodge to release a shrunken version of the car. A muscular look with flared wheel arches, an upright front, and a wide rear end would make for a very impressive design.

Even though the 2019 Dodge Barracuda will be smaller, it won’t necessarily offer less space inside the cabin. Thanks to the new platform, the car should be more than capable of accommodating up to 4 people in perfect comfort. The front seats will be mounted considerably lower than those in the current gen Challenger so that it will feel a lot more like a pony-car than before. This should also allow Dodge to free up space for the trunk so that the car will be just as usable as before.

There is no doubt about the fact the US customers love their V8 engines. However, in the recent times, it became clear people are looking for performance first and then at how many cylinders the engine has. Because of that, it is safe to assume the 2019 Dodge Barracuda might not go on the same path as the outgoing model. Instead, the car is more than likely going to feature turbocharged power even on the base trim levels. A 2-liter turbo-four with up to 270 horsepower and 280 lb-ft of torque might just be the base engine.

Further up the range, we may see Alfa’s 3 liters twin-turbo V6. This engine is known to make anything between 300 and up to 405 horsepower. The 2.9 liter Ferrari-supplied V6 from the QV Giulia is unlikely on this particular model. However, the Barracuda might receive a high-performance engine, likely in an SRT version. This could offer around 500 horsepower and north of 500 lb-ft of torque from a 3.8 liter twin-turbo V8. And make sure to check this list on MotorCities if you are looking for a better battery for your Dodge

It also seems that an even more powerful model, possibly a hybrid, with north of 800 horsepower, could be offered at a later date as a replacement for the Hellcat which has been the trim level that saved the Challenger and the Charger from being discontinued. 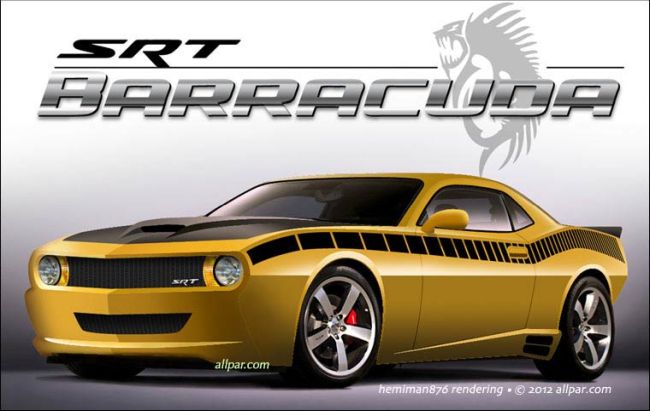 A while ago spy shots of a new Challenger started to surface around the internet. These pictured a regular Hellcat …