Honda released a brand new version for the CRV last year. The new car has nothing in common with its predecessor even though it might still look similar. It is based on a new chassis, it boasts new engines, and it is both larger and lighter than before. While the car has been released only as a 5-seats model, not that long ago the 2019 Honda CRV 3 row has been revealed for the Indonesian market. Unfortunately, it seems that the car might be offered only in Indonesia, but things could change in the long run.

There are some really interesting quirks about this model because it doesn’t follow the usual 7-seats recipe. The 3-row CRV is basically the same car as the regular model with two added seats in the trunk. 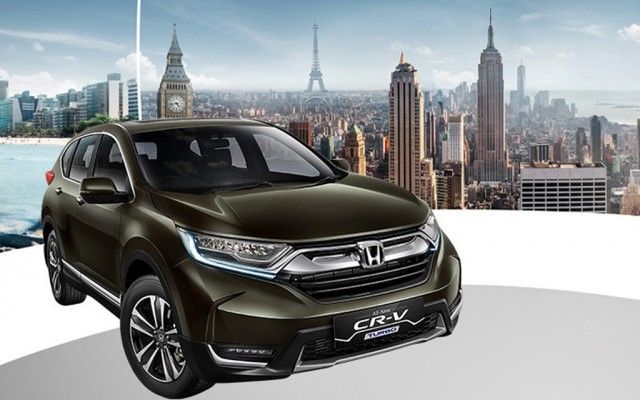 The car has the same wheelbase of just under 105 inches, and it is just as long at 180 inches. This is considerably less than some of its rivals. Even so, Honda managed to setup the interior of the CRV to accommodate up to 7 passengers. There are some drawbacks with this type of design but more on that later. The Indonesian model is mostly identical to the US version.

This means it still has the same high strength steel body which is highly durable in the case of a crash. On top of that, the CRV comes with considerably more kit than before which is great, especially for the price. The ongoing 5-seats CRV starts at little over Rp432 which is roughly the equivalent of $32,000.

The 2019 Honda CRV 3 row, on the other hand, is expected to cost only marginally more than that. This would allow it to undercut the competition while not ruining the quality of the materials inside.

The 2019 CRV 3 row is identical regarding looks to the usual version. In the front, the car has the same aggressive design with the swept back headlights, the two-piece grille, and muscular looking bumper. The Indonesian 3-row CRV might receive a bit more attention when it comes to the exterior features. We can expect the car to be released only as a premium version, so things like the chromed accents or the dual-exhaust might be offered as standard for this particular model.

As the name suggests, the 2019 Honda CRV 3 row boasts three rows of seats that can accommodate up to 7 passengers. While the exterior remains identical to the usual CRV, inside, there is a different story. The dashboard and front seats remain unchanged from the 2017 CRV. The car gets the same great infotainment system, materials, and driving position. However, the middle seats have been moved forward to make room for the extra row of seats.

The middle seats are slimmer than on the regular model, use different headrests, and they don’t recline at all. The center armrest is also smaller; all needed to make room for the back seats. These are mounted on the trunk’s floor, so the sitting position is not ideal. Because of that, the third row of seats is really usable by children. On top of that, with the third row of seats up, the 2019 Honda CRV 3 row will have no trunk left which is the real drawback.

Even though they haven’t announced yet, it is safe to assume the 2019 Honda CRV 3 row boasts the same engines as the regular model. This means that the Indonesian market will only get the 2.4 liters naturally aspirated inline four engines. With 184 horsepower and 180 lb-ft of torque, the output of this engine is hardly impressive. However, thanks to a smart CVT gearbox and standard front wheel drive, the 3-row CRV should be one of the more fuel-efficient cars in its class. If Honda decides to offer the model in Europe and US, then we can expect two additional engines.

A 1.5-liter turbo-four with 190 horsepower will likely be the choice most people are going to get. However, some markets will also receive a 1.6-liter turbo-diesel with 160 horsepower and 258 lb-ft of torque. This should offer considerably better efficiency than the other two without a huge loss of performance.

The RAV4 is one of Toyota’s best selling cars so it is quite clear why they prefer incremental changes. However, …