Are  you ready for one more big SUV? This time, Audi prepares to launch an all – new model, named 2018 Audi Q8. Audi is one of the first manufacturers to release a high-end SUV with the Q7. However, not many know that BMW is the manufacturer that started the sporty executive crossover craze. Their X6, while a niche car, managed to get a lot of customers from the start and put BMW on the map of high-end crossovers. After many had sawed how successful it could be, more and more manufacturers started to get part of the market for themselves. After Mercedes released the GLE to compete with the X6, it seems that Audi will be the second true competitor for the X6.

The rumored 2018 Audi Q8 has not been confirmed by Audi up to this point. However, the car has been seen testing a couple of times, and it seems it will be closer to the Q7 than some people said it would.

For starters, the Q8 will definitely use the MLB Evo platform which underpins both the Bentayga and the Q7. However, it will match the wheelbase of the latter, but it will be smaller in size. Early rumors say that the Q8 will be with up to 80mm lower than the Q7 and it will be significantly shorter as well. It will also be wider. From all the spy shots we have seen so far, it seems it might be with up to 50mm wider.

The test mule had its rear wheels pushed outward with the front wheels being at roughly the same level with those on the Q7. This type of setup would allow for a really aggressive look while also improving the way the car handles.

Unfortunately, there hasn’t been much information about the exterior design of the 2018 Audi Q8. They decided not to offer any type of information about it which is understandable. However, the test mule still gives us a few details which are really interesting. For starters, the wider track will mean a beefier look. On top of that, it seems that the car will also have much shorter front and rear overhangs. This is quite clear from the fact that the radiators, as well as the exhausts, have been pushed further into the body.

From these shots, we can also see the driver who sits lower than in the Q7. This likely means a lower roof as well as a lower center of gravity. The suspension might not sit much lower than that of the Q7, but this could easily change with an air-ride setup.

Even though Audi has not said much about the cabin of the upcoming Q8, it is safe to assume that it will roughly use the same cabin as the Q7. This has been the case with the X5 and X6 as well as with the GLC and GLE. However, unlike the Q7 which offers seven seats, the 2018 Audi Q8 will only get five seats. Some rumors also suggested at a top end version with only four seats. The third row of seats will be removed in order to make room for the raked roof which is going to take a good portion of the cabin. 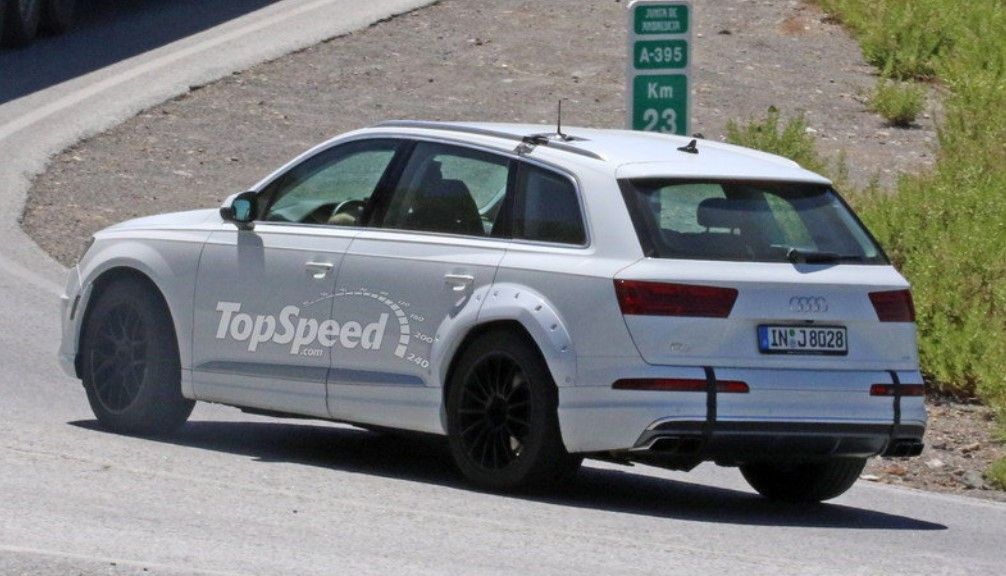 The engines – anything special?

So far it seems that the 2018 Audi Q8 is going to boast the same powertrains as the Q7 with only minor differences. For starters, the base car is unlikely going to receive the 2-liter turbo found on the Q7 or the 3 liters supercharged V6. Instead, we might see Audi’s upcoming 3-liter twin-turbo V6 which is also expected on the Q7. This could offer up to 360 horsepower and more than 330 lb-ft of torque while being more efficient than the older supercharged unit. Further up the range, we may see a Porsche-developed 4-liter twin-turbo V8 which debuted earlier this year on the Panamera.

This engine could make around 450 horsepower in the Q8 and up to 600 horsepower in an S or RS version. Diesel will be available in Europe. This will likely use the 4-liter triple-turbo V8 from the SQ7 which can offer close to 450 horsepower and well over 600 lb-ft of torque. No matter the engine of choice, Audi’s Quattro all-wheel drive system will definitely be a standard feature. Also, an eight-speed automatic, likely provided by ZF, will be available across the range as the only transmission.

After missing from the market for a few years, GM released the all new Colorado for the 2015 model year …