After BMW proved with the X6 that niche products could be successful more and more manufacturers started to join their ranks. Mercedes, despite being late to the party, already released two different cars aimed at BMW’s X4 and X6. The GLC Coupe is the smaller of the two, and despite being quite new, it sells very well for this type of car. However, Mercedes didn’t actually release the entire lineup just yet. The model is only available with a few engines while its high-performance AMG versions are still missing.

This is because the two are going to be released quite soon. The first is going to be the 2018 Mercedes AMG GLC63 Coupe. Just like its name suggests, this will basically be identical regarding powertrain to the C63 AMG with a small difference, the running gear. Not only the GLC will be taller, but it might surprise us with its transmission layout.

More details about this coupe

Even though this is a rather late release considering the car has been out for a while, it is understandable. Mercedes wants to release finished products so that the AMG won’t have any problems at launch. Installing such a powerful engine in a crossover means quite a few upgrades over the regular models. The larger of them all is going to be the suspension. Just like the regular sedan, the GLC is expected to come with an adaptive suspension system.

This should allow the car to be driven fast around corners without having to worry about the higher than usual center of gravity. The car might be released in the next few weeks at Geneva. Its price will likely be set around $80,000 which would be just little over $10,000 more than the regular AMG sedan.

To compete with BMW, Mercedes had to offer a four-door coupe on stilts. However, unlike BMW which derived the design of the X4 from the smaller X3, the GLC Coupe shares quite a bit with the sedan. The roof-line is nearly identical while the rear end seems to be taken straight out of the regular Coupe. The result is a more aggressive model than BMW’s own, so Mercedes already have an ace on their hands. To top it all off, it seems the 2018 Mercedes-AMG GLC63 Coupe will get a new front end.

Even though it has been heavily camouflaged, it is quite clear that the car will get the same type of grille as that in the revised AMG GT. Coupled it with a new set of headlights, considerably larger air intakes in its bumper and a wider body, the AMG GLC is configured to impress. Even though Mercedes hasn’t released much information about it, it seems it will come with the same type of wheels as the regular C-Class AMG. 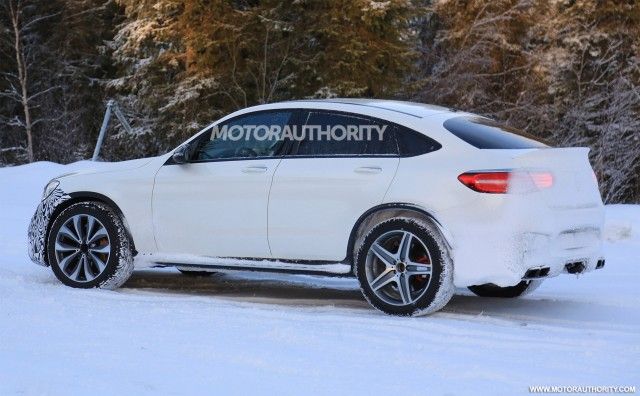 Up to this point, we haven’t been able to see much of its interior. Despite that, it is safe to assume the changes will be kept to a minimum. Here the 2018 Mercedes-AMG GLC63 Coupe will definitely get the same seats, steering wheel, instrument cluster and overall equipment level as the C63 Sedan. The only real differences between the two will be the slightly higher driving position due to the taller suspension.

There is no doubt about the fact the 2018 Mercedes AMG GLC63 Coupe will use the same 4 liters twin-turbocharged V8 from the sedan. Here the engine makes either 469 horsepower on the regular model while the S version gets a boost to 503 horsepower. Some rumors suggested the GLC might only get the latter version due to the added weight. However, considering what both BMW and Mercedes did in the past, it is safe to assume this is not true. The car may also receive an even more powerful version, possibly an R, with as much as over 530 horsepower.

Mercedes’s spokesman also said that the future AMG63 models are going to be rear wheel drive. This doesn’t necessarily mean that the GLC will be rear wheel drive only. An all wheel drive, considering it is a crossover, it is more than likely at this point. Regarding transmission, a 7-speed dual clutch automatic, probably a slightly revised version of the one on the current C63 AMG. This will be tweaked to better suit a high-performance crossover rather than a sedan. 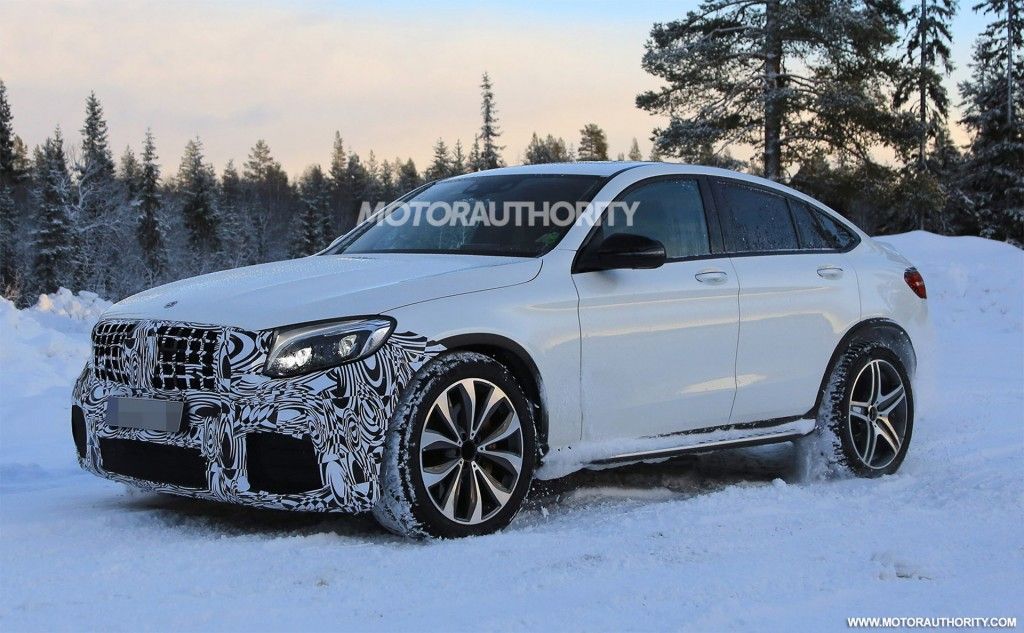