The current Charger is approaching the end of its life. The car has been around, in one form or another, for more than a decade. In order to go out with a bang Dodge is preparing some really interesting models. So far it seems that these will be offered only for a limited amount of time and they will sell more than just a few cars. While the Challenger received the T/A model, the sedan has been updated with the 2017 Dodge Charger Daytona.

The name is not new, and it was last used back in 2013. This time around it means more than just a few stickers on the outside, though. The Daytona package can be had with the two big V8 engines, and it does add a few unique features as well. Dodge set the price for the base Daytona at little under $40,000 with the top end model costing $45,000 which is $4,000 more than the base model.

Is it worth it?

In the long run, the 2017 Dodge Daytona is more than likely more than just worth it. Being a limited edition model, the car will depreciate a lot slower than the usual model. On top of that, even though it is more expensive than the base car, it also gets a lot more features as standard. These only increase the value for a really great overall package.

Let’s take a more in-depth look at the new Daytona.

Like we said, both models get not only exterior updates but also performance upgrades. Dodge has borrowed parts from the Hellcat for the 392 model which give the driver more confidence in actually driving the car at high speed. The lesser version of the Daytona doesn’t have as many upgrades, but it still is impressive.

Let’s start with the 5.7-liter version.

Both models are based on the top end versions of the car. However, both of them come with extras. The base 2017 Dodge Charger Daytona has a 5.7 liter naturally aspirated V8 which provides 370 horsepower and 395 lb-ft of torque. This particular engine has remained unchanged ever since the current generation was released. However, it doesn’t really show its age. It still feels as crisp as ever, and it manages to offer a good compromise between fuel consumption and power. Rear-wheel drive and an eight-speed automatic are the only offerings when it comes to the transmission.

This 5.7-liter model received quite a few upgrades over the regular R/T package model at the same price. It comes with an active 2.75-inch active exhaust system and with a conical air filter which should improve the engine feedback slightly. The wheels have been bumped to 20×9 inches front and back and high-performance rubber is now standard. The car also gets unique black accents, a massive HEMI decal on the hood and unique colors. 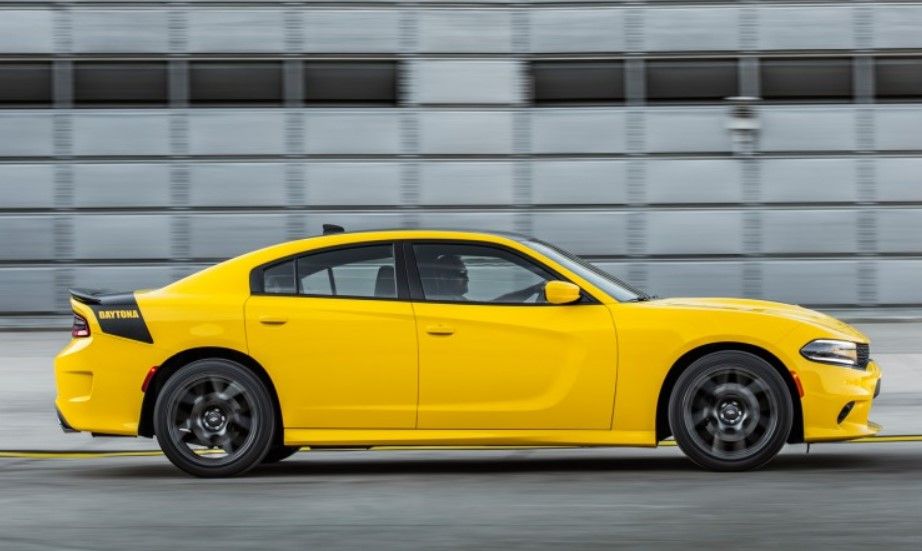 This is likely the 2017 Dodge Charger Daytona that everyone is looking at. Unlike the lesser model, this gets the larger 6.4 liters naturally aspirated V8 HEMI engine. This is good for 485 horsepower and 475 lb-ft of torque, and it feels a lot faster than the 5.7-liter model. This particular trim level gets the same eight-speed automatic as before. However, it comes with a different ratio for the rear axle which improves high-speed acceleration by quite a bit.

Well, both versions of the 2017 Dodge Charger Daytona get quite a few performance upgrade which would come with the optional Super Track Pack package. Things like braided steel brake lines, a performance suspension with new springs and re-tuned shocks and even a three-mode stability control system are all standard.

Also, both cars get the same exterior graphic and upgrades such as the SRT front and rear bumpers and the larger exhaust system. There is no real difference between the two, at least on the exterior, and that’s great. Why? It gives people options without having to ditch style!

A couple of months back Ford revealed Mustang’s facelift which comes with quite a few changes over the original. However, …