The RS5 has been Audi’s response to the M3, and later M4. However, because the car was actually released back in 2010, it failed to challenge its rivals. It had a 4.2 liter naturally aspirated engine which was great and provided plenty of horsepowers. However, it was down on torque, and due to the car’s weight, it wasn’t really the ideal companion. Things changed a short while ago, though. After the new A5 had been released, it was quite clear than a new RS5 would eventually be showcased.

However, Audi decided not to wait a couple of years and instead already revealed the new 2018 Audi RS5. The car is based on VW’s brand new MLB Evo platform, just like the regular A5. Thanks to the extensive use of aluminum and high-strength steel, they managed to shave little over 120 pounds from the car’s total weight. While this may not sound like much, it is quite impressive, but more on that a bit later.

More details about this car

The basic recipe for the new RS5 remained unchanged from the previous car. It still is a two-door sports car which comes as standard with four-wheel drive. It is lower than the regular A5, and it also gets a new running gear as well. The engine has been extensively upgraded in order to make it as fast as possible, so the result is one of the most impressive cars in its class. The price has yet to be revealed but considering all the upgrades we expect at least $70,000 for a base version.

The upgrades – its running gear

The new 2018 Audi RS5 uses a five-link suspension setup all around the car. This is rather unique, especially since this type of suspension takes up a lot of space. On top of that, the car gets adaptive dampers as standard and 0.8 inches lower springs. Options will include a fully adaptive suspension system, a sharper steering system as well as carbon ceramic brakes. The latter will most likely be needed by most, especially with the amount of power it has.

The car definitely looks like an A5, but Audi turned everything to eleven. For starters, it comes with a much more aggressive body kit. This is there to aid with the car’s aerodynamics and also give it the style it needs to stand out. In the front, it sports a large splitter, new honeycomb grilles, and even carbon accents. The mirrors, side skirts, and rear diffuser all seem to be made out of carbon as well. Audi’s LED headlights are offered as standard while at the back it gets a dual-exhaust system which should be able to react to the car’s selected driving modes.

The interior hasn’t changed much from the basic A5. Here Audi offers their digital instrument cluster, large infotainment system, carbon fiber inserts, flat bottom steering wheel and leather sports seats as standard. The seats can be upgraded even further, but Audi didn’t showcase the sportier ones so far. 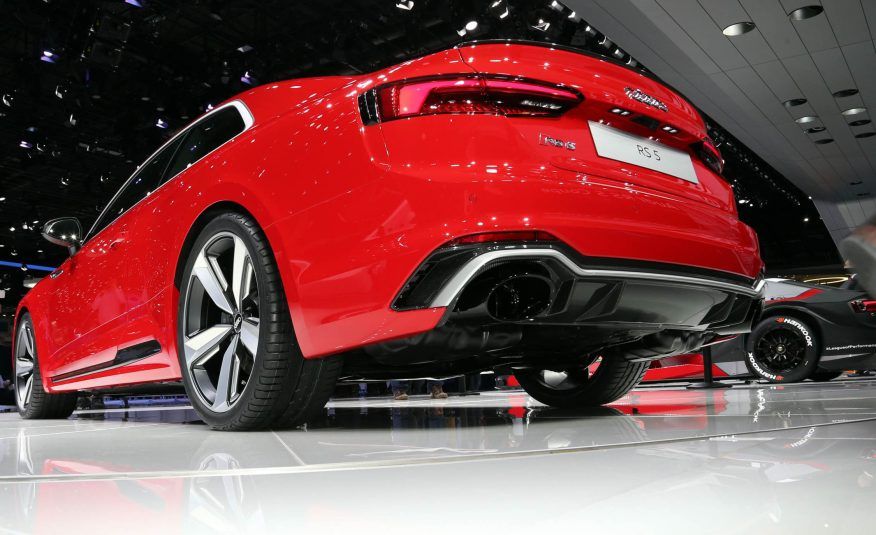 Here lies the most impressive part of the 2018 Audi RS5, its engine. Like we said, the previous car had a large V8, and it weighed quite a bit. The new model actually gets a heavier engine in the form of a 2.9-liter twin-turbocharged V6 gasoline unit. This is actually the same engine that powers the Panamera S which is rather impressive. The engine has been specifically tuned for the RS5 to offer the most amount of performance without affecting the reliability of the car.

Here it makes 444 horsepower and 443 lb-ft of torque. While it has just as much power as the old V8, it makes 125 lb-ft of torque more than before which with the lower weight should add for some impressive results. The Quattro all wheel drive system now sends as standard 60% of the torque to the rear wheels. This should alleviate the car’s understeering problems and make it a bit faster around corners. On top of that, the RS5 features an eight-speed automatic gearbox.

Unfortunately, Audi didn’t say what gearbox this is but if we had to guess, then we would bet on Porsche’s eight-speed dual-clutch unit. With it, the RS5 has all it takes to become the fastest car in its class by a big margin. 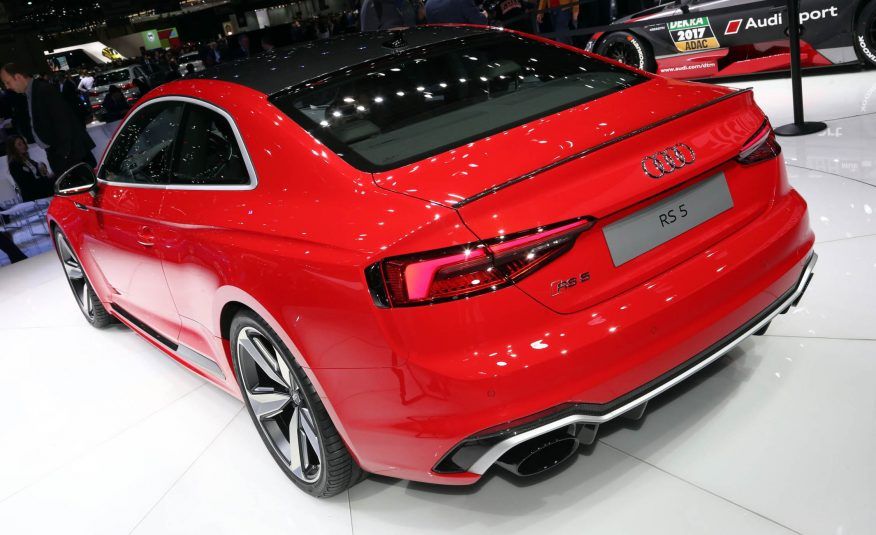 After Mercedes released the sedan, wagon, coupe and All-Terrain versions of the E-Class, they are nearly done with model range. …