Ever since the Tribeca was discontinued, Subaru was left without a seven seat crossover. In fact, their only true crossover has been the Forester which also happened to be one of the more successful cars in its class. However, the US market started to crave seven seat crossovers more and more in the favor of the usual minivan. Because of that Subaru had to think fast about a successor for the former Tribeca.

Last year they released the Viziv-7 concept which showcased a possible seven seat crossover. This had a rather bulky design with muscular lines, something that Subaru failed to deliver in the past few years.

Not that long ago the first finished prototypes have been seen testing on the streets. It seems that the car will be released as the 2018 Subaru Ascent and it should be the successor for their Tribeca. Unlike its predecessor though, which had a rather harsh release, things should go smoother this time around. For starters, the car comes with a rather impressive design. On top of that, it will be Subaru’s second car to use their new modular global architecture. This also underpins the latest Impreza, and it is a great improvement over the older one.

The new platform is considerably stiffer, so it should deliver better NVH levels, and it also has a lower center of gravity. Both of these will help tremendously with a 7-seats crossover which is usually quite high off the ground. So far the price hasn’t been revealed. Despite that, considering the price of the Forester and how its competitors are priced, the Ascent should start right around $30,000.

Like we said, the 2018 Subaru Ascent is more than likely going to feature their latest corporate look. Even though at first the car was heavily camouflaged, more recently it revealed most of its lines. In the front, it seems very similar to the 2016 concept. It has the large hexagonal grille and swept-back headlights as well as a large lower air intake. The Impreza design cues can be seen quite clearly.

However, the body is more muscular, and it features clean-cut lines that do make the Ascent seem beefy. The prototype had black roof-railings, a large sunroof, silver mirrors and black wheels. The wheelbase definitely seems longer than on the Forester, and it also seems to boast considerably longer overhangs. The latter should help with trunk space, but they will also limit the car’s ability to go in off-road. In the back, we can see clear influence from both the Forester and the Viziv-7.

The production Ascent might feature a similar shape to the concept but get tail lights, and possibly exhausts, more similar to those on the Forester.

What about the interior?

So far Subaru hasn’t released any information about the cabin of the Ascent. Despite that, it is safe to assume they will turn for inspiration to the Impreza. In fact, things like the climate controls, infotainment system, instrument cluster and possibly part of the dashboard’s design might be identical to the sedan.

The 2018 Subaru Ascent will definitely feature a taller driving position and likely more features on the base trim levels. It will also get seven seats as standard while the middle row of seats should be able to slide and recline.

The most probable engine to be fitted on the 2018 Subaru Ascent is the 2-liter turbocharged flat-four gas mill, the same as that in the Forester. This is a new generation FA engine which currently makes 250 horsepower and 258 lb-ft of torque. The crossover could do just fine with it as the base powertrain, and it would actually offer more power than some of its rivals. Many rumors also suggest Subaru’s 3.6 liters naturally aspirated flat-six engine as an alternative. While this would be a unique engine, it wouldn’t make much sense.

It usually makes just as much torque as the smaller flat-four with only a slight increase of power. Instead, Subaru may offer a larger 2.5-liter turbo flat-four with north of 300 horsepower and 300 lb-ft of torque. This would allow the car to better compete in its class and also give people a choice. Like with any other Subaru on sale, the Ascent will feature all-wheel drive as standard while an automatic should be the only available transmission. 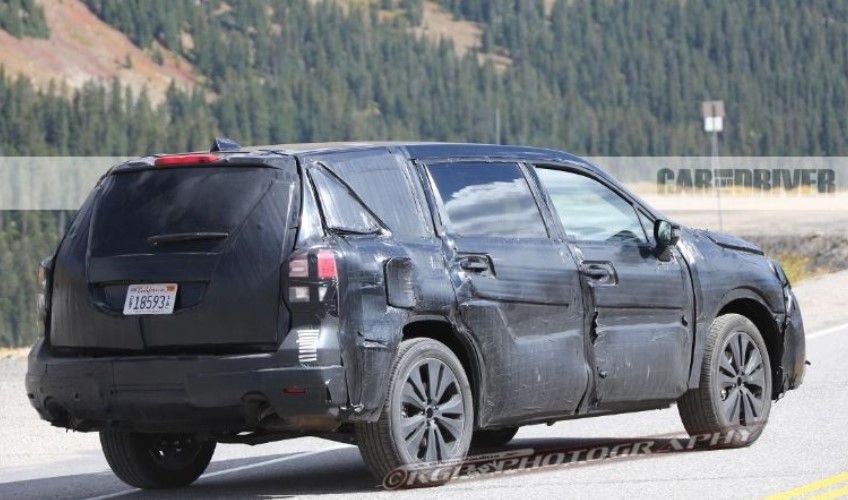